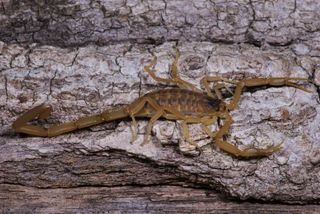 And that sluggish running, and extra female fierceness, may be a result of the extra weight they carry from pregnancy, the researchers said.

"The females are heavier, and they can't sprint as fast," said study co-author Bradley Carlson, an ecologist at The Pennsylvania State University. "Heavier ones have to compensate for that by stinging more." [In Photos: Top 10 Deadliest Animals]

Past studies had suggested that female scorpions tended to be extra aggressive, wielding their venom-packed stingers more quickly in comparison to males.

Carlson and his colleagues suspected this aggression was a result of differences in their tails, with males' longer, skinnier ones perhaps being more difficult to wield. (A scorpion "tail" is, in fact, just an extension of the abdomen, with a stinger at the end.)

So the researchers ventured into the New Mexican desert to trap bark scorpions. This particular scorpion species, Centruroides vittatus, can be found from Arkansas to New Mexico and grows to about 3 inches (7.6 centimeters) long.

Unlike the deadlier bark scorpions found farther west, C. vittatus has a sting that's not much worse than a bad bee sting, Carlson said.

Because the nocturnal creatures contain a chemical that glows under ultraviolet light, the researchers set out in the dead of night, shining blacklight flashlights on the desert landscape.

"If the light hits one, you'll suddenly see this bright-green glowing shape in the grass or the rocks," Carlson told Live Science.

They eventually scooped up 30 females and 31 males by the tail using long tweezers, dropping them into a plastic bag.

The researchers weighed the scorpions, then placed a 1-inch-long (2.5 cm) cardboard target on their backs and tracked how often they stung. In another trial, they measured how fast the insects sprinted across a track.

No matter the sex, heavier animals were more aggressive.

But on average the females were heavier, likely because they are pregnant eight months of the year and have to lug around a belly full of baby scorpions in addition to their own body weight.

The males were the speedier sprinters, running about 30 percent faster than the females. The females seemed averse to sprinting, Carlson said.

"Females would sometimes just run a little ways and then give up," Carlson added.

So the females may simply be too heavy to scurry away quickly, and would rather wield their stingers to defend themselves, Carlson suspects.

As a follow-up, the team wants to figure out exactly why male scorpions have longer, skinnier tails than females.

The findings were detailed today (May 28) in the journal PLOS ONE.