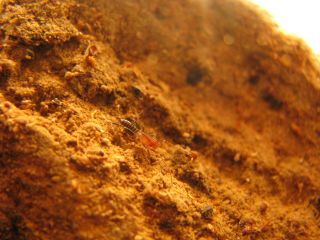 Two new species of short-tailed whip scorpions have been found living deep inside the cool, humid caves of northeastern Brazil, a study reports.

Whip scorpions are not true scorpions, but rather part of a group of arachnids that don't have stings and are not poisonous. They possess a whip-like tail, but look more like ants.

Previously, scientists thought whip scorpions came predominantly from the Caribbean. The new species, Rowlandius ubajara and Rowlandius potiguara, are some of the first from South America. [Creepy, Crawly & Incredible: Photos of Spiders]

The newly discovered creatures are the same size and same reddish-brown color as other whip scorpions. "You can only tell the species apart by looking at their genitals," said lead study author Adalberto Santos, an arachnologist from the Federal University of Minas Gerais in Brazil.

Twenty-five living specimens of R. potiguar were found in 20 caves of the Apodi Limestone Group in the state of Rio Grande do Norte. Males of this species vary widely in the length of their second pair of legs, known as "pedipalps," which are used for mating and fighting. This variation might reflect different strategies used by males of different sizes, Santos said. Bigger males with larger pedipalps might fight rival males for females, whereas smaller males may avoid fighting altogether and simply try to mate with females when bigger males aren't around.

"It's better to be a bigger and stronger male, but not everyone can be a bigger male," Santos said.

Specimens of R. ubajara were only found in the Ubajara Cave in the state of Ceará. This species did not show the dramatic variation in pedipalp length that R. potiguar males did.

Researchers found both new species of whip scorpion in caves where bats resided. These arachnids probably eat springtails and other small insects that come to feed on bat guano.

Although the first specimens were found in caves, the new whip scorpions may not be exclusively adapted for life in the dark. Both species lack eyes, but this usually happens in short-tailed whip scorpions because they don't need visual information to survive. "The animals look exactly the same as animals that live outside caves," Santos said.

Still, most of these new insects have been found in caves, which are threatened by Brazilian mining activities. "Mining companies are allowed to explore and destroy caves," Santos said, adding, "We have to explore our caves and cave habitats" and find species before they are destroyed.

The findings were reported today (May 22) in the journal PLOS ONE.