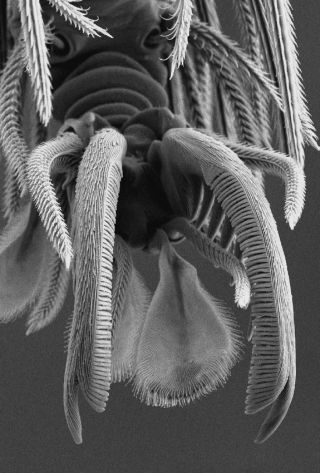 Spiders live on every continent, except Antarctica, and in many environments, from rain forests and deserts to studio apartments.

As familiar a sight as these eight-legged creatures might be, there is plenty we don't know about them.

Scientists have described about 43,000 species of spiders, and Norman Platnick, the American Museum of Natural History's "spiderman," estimates that just as many remain to be discovered.

"Because these are only estimates, people disagree," Platnick, the museum's curator emeritus of invertebrate zoology, said of estimates of the unknown species. "I have argued that we are basically halfway through [identifying the world's spiders]. Some of my colleagues think I am being way to optimistic and we are closer to only 20 percent through." [Creepy, Crawly & Incredible: Photos of Spiders]

To figure out how many species remain to be discovered, scientists often look to museum collections. Because finding and collecting a specimen takes much less work than figuring out what it is, Platnick said, these collections can accumulate unidentified specimens.

The spiders and other arachnids known to science so far are amazingly diverse. A new exhibit, opening Saturday (July 28) at the New York City museum, explores this diversity and offers visitors the chance to get up close with live spiders and a few of their close relatives.

These include one of the largest spiders, the goliath bird eater whose prey includes snakes, mice and frogs; the western black widow, one of the few spiders poisonous to people; as well as other arachnids, including the desert hairy scorpion and the skunklike giant vinegaroon, which sprays a vinegar-like chemical from its abdomen when disturbed.

Live goblin spiders, which Platnick is currently studying, are not on display. Typically about 0.08 inches (2 millimeters) long, these spiders are easy to miss, and as a result were a particularly poorly known spider family. In 2006, Platnick and collaborators from around the world began a Planetary Biodiversity Inventory focusing on the goblin family, Oonopidae. At the time, fewer than 500 species — an estimated 20 percent of the family's actual diversity — had been described. Today, that number is more than 1,000, according to Platnick.

Improvements in microscope and imaging technology have made it much more realistic to study tiny living things, he said. Most tiny spider species live on the ground, so to find them researchers must scoop up soil and leaf litter and sort through it using sifting or funneling devices and by hand. Some have also been found living in tree canopies.

Like their spider relatives, many scorpions remain unknown to science, said Lorenzo Prendini, a museum curator who studies scorpions.

About 2,000 species of scorpions have been described, but "there may be at least double or probably triple the number of species remaining to be discovered," Prendini said. "I say that because whenever we go to an area, let's say in the southwestern United States or South Africa or Australia that are relatively better known for scorpion fauna, and we survey the area thoroughly and using a variety of modern techniques we double or triple the number of species in the area."

Extrapolating out to the rest of the world, he estimates there are between 4,000 and 7,000 scorpion species on the planet.

It's not clear where scorpions fit in the arachnid's family tree, since analyses relying on anatomical or genetic data show scorpions branching off from other arachnids at different points in Arachnida's evolutionary history.

The relationships among scorpions themselves are still being resolved, and have relevance for much broader questions.

"Because scorpions are so old as a lineage, as I mentioned 425 million years old, and because they don't move around much, they are a very good group for understanding how the Earth evolved geologically and climatically over time," he said.

The exhibit SpidersAlive! is scheduled to run through Dec. 2 at the American Museum of Natural History in New York.