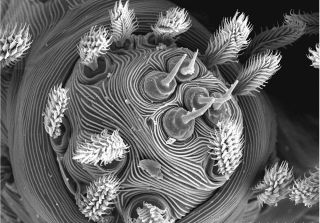 Stenoops peckorum is a newly discovered species of goblin spider from southern Florida likes to hunt its prey instead of catching it in its web.
(Image: © Bulletin of the AMNH )

This posterior lateral spinneret, a silk-spinning organ of a spider, features frond-like setae and whorls of exoskeleton. It belongs to a female Stenoops peckorum, a newly discovered species of goblin spider from southern Florida.

This species was among 17 new species of goblin spider discovered in 2010 by Norman Platnick, curator emeritus in the Division of Invertebrate Zoology at the American Museum of Natural History.

Despite their fearsome name, goblin spiders are tiny. They tend to be less than 2 millimeters in length. The spinneret pictured above is approximately 30 micrometers across, roughly the diameter of a thin strand of hair.

The five protrusions at the center of the spinneret are spigots that produce a single type of spider silk. The silk, sometimes in combination with silk from other spinnerets, can be used in any number of ways, including reproduction or navigation, but not for a conventional prey-trapping spider web.

"All spiders do make silk, they just don't always use it to catch food," said Platnick. Instead, goblin spiders hunt down and devour whatever small insects they can catch.

Platnick's discovery opens the door for future research on goblin spiders. "Most aspects of their biology have not been explored at all," said Platnick.

The study was partially funded by the National Science Foundation as part of the goblin spider (Oonopidae) Planetary Biodiversity Inventory project.