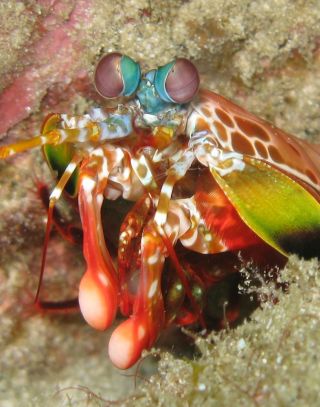 If sea creatures were Marvel comic book characters, the peacock mantis shrimp would be Thor. These colorful crustaceans have a hammerlike claw that can smash prey with the acceleration of a 0.22-caliber bullet — not unlike the superhero's mythological weapon.

Now, a new study reveals the secrets behind the strength of the mantis shrimp's claw at the molecular level. It turns out this appendage is ideally adapted to deliver punishing blow after punishing blow without breaking. These adaptations are already inspiring researchers to engineer biology-mimicking materials that could inspire everything from better boat propellers to safer body armor.

"What makes [mantis shrimp claws] so incredible is that they're stiff and they're also tough, which is really kind of an inverse relationship in materials science," said study researcher David Kisailus, a materials scientist at the University of California, Riverside.

Using electron microscopes and other sensitive techniques, Kisailus and his colleagues delved deep into the claw of the Indo-Pacific peacock mantis shrimp (Odontodactylus scyllarus). These crustaceans aren't actually shrimp, but they get their name from their shrimplike appearance, which Kisailus and his colleagues compare to "heavily armored caterpillars" in this week's issue of the journal Science. [Photos of Dazzling Mantis Shrimp]

Peacock mantis shrimp are solitary, territorial hunters. They lurk in dens or seafloor tunnels and use their hammerlike claws to kill mollusks, crabs and other tasty treats.

Fishermen sometimes call mantis shrimp "thumb-splitters," for reasons that aren't hard to imagine, given that the shrimp can wield their claws at speeds of 75 feet (23 meters) per second and deliver blows with 200 pounds (91 kg) of force behind them despite being only 4 inches (10 cm) long. These blows also create bubbles in the water that strike prey with about half the force of the initial strike. [Video: See Mantis Shrimp Strike]

Kisailus has experienced these forces firsthand, thanks to the mantis shrimp he keeps in his lab. Curiosity has gotten the best of him and his colleagues, Kisailus told LiveScience, and they have, on occasion, stuck their fingers in the mantis shrimp tanks — with multiple layers of rubber gloves and wax film for protection.

"It still hurts like hell," Kisailus said. "It didn't break our fingers after putting so many layers on, but I'm sure if we didn't, it would have."

Mantis shrimp molt and replace their claws every few months, but they still strike tens of thousands of times with each iteration of these clublike appendages. Kisailus and his colleagues found that this incredible strength comes from three different regions in the claw. The impact region, or striking surface, is dominated by a mineral called hydroxyapatite, a calcium-containing substance that gives human bones their hardness. The mineral is arranged so that it forms pillars perpendicular to the striking surface, not unlike a concrete pylon holding up a bridge.

A second region called the periodic region backs up the impact zone with chitosan, a carbohydrate molecule that forms long chains and makes up part of chitin, the substance in crustacean shells.

The chitosan in a peacock mantis' claw, which lies just beneath the impact zone, is stacked at different orientations, like a ream of paper where every sheet has been angled slightly askew. That makes it tough to crack, as any crack that does form has to change directions in order to continue through the claw.

"What nature has actually done is it's actually built things so that, yes, flaws can happen, but when they do happen they're not going to fail catastrophically," Kisailus said.

Finally, a sharp transition marks the striated region, which runs along the sides of the claw. This region acts like the tape around a boxer's knuckles, Kisailus said, compressing the claw to make cracks less likely.

Other than highlighting some cool crustacean abilities, the findings are already proving fruitful for human engineering. Kisailus and his colleagues are working on materials engineered like these natural hammers that could be used in aerospace engineering, automobiles, military body armor and even sports helmets. An initial design, only under development for six months, survived the first tests without a single bullet penetrating, despite being only 0.4 inches (1 cm) thick, Kisailus said.

"Obviously, we still need to optimize, but we have some high-quality biomimetic structures," he said.