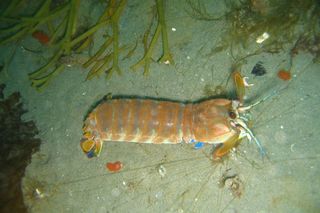 A mantis shrimp, Hemisquilla californiensis, the species recorded rumbling in and around its burrows off the California coast
(Image: © Erica Staaterman)

The ocean floor is alive with sound, as snaps, squeaks, hums, grunts and rasps emanate from the animals that inhabit this dimly lit environment. New research has added another contribution to this ruckus: rumbling sounds made by the California mantis shrimp, a burrow-dwelling, predatory crustacean about 8 to 10 inches (20 to 25 centimeters) long.

The shrimps' sounds had previously been studied in a laboratory, where researchers found that half of the dozen males made low-frequency rumbling noises, while the females remained silent. The male makes the rumbling sound by vibrating its muscles, using sensory hairs on its body to "hear" rumbles made by others. [Infographic: The Loudest Animals]

But scientists, led by Erica Staaterman, then a staff member at the University of Massachusetts, wanted to see how the mantis shrimp (Hemisquilla californiensis) behaved in their natural habitat. So, they set up recording equipment at two locations, near shrimp burrows, off the coast of Santa Catalina Island, Calif., in March during the early mating season.

Compared with the tank-dwelling mantis shrimp, the shrimp living off the coast of California produced rumbles that were more variable and occurred in rhythmic groups. Based on characteristics of the recordings, they determined that multiple shrimp, each making a distinct rumble, were contributing.

At times, more than two shrimp were audible, perhaps representing a mantis shrimp "chorus," the researchers write in the current issue of the journal Aquatic Biology.

The shrimp rumbled most during dawn and dusk hours, when they were most likely to be foraging for food or guarding their burrows. During the middle of the day and at night, the shrimp retreated into their burrows, closing a mucus cap behind them. The recordings revealed sporadic, low-level sounds during these times.

The rumbles are most likely produced as a way for males to protect territory and attract females, the researchers write. It is still not clear whether or not females rumble.

Staaterman is now a graduate student at the University of Miami Rosenstiel School of Marine & Atmospheric Science.