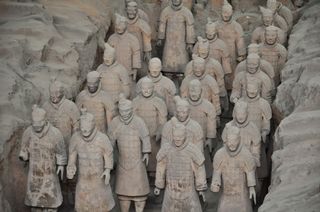 Thousands of terracotta warriors guard the tomb of the first emperor of China.
(Image: © Shutterstock)

Museum staff didn't realize the thumb was missing until weeks after it had been stolen. The stone digit belonged to a terra-cotta warrior, one of thousands of life-size guardians tasked with protecting and serving China's first emperor, Qin Shi Huang (259 B.C. - 210 B.C.) in his afterlife.

Ten of these terra-cotta warriors are on loan for an exhibit at The Franklin Institute in Philadelphia through March 4. On Dec. 21, 24-year-old Michael Rohana and friends allegedly snuck into the exhibit during a pre-Christmas party. When his friends left, Rohana allegedly stayed behind, using the light from his cellphone to view the displayed items, according to an affidavit by Jacob Archer, a special agent with the FBI's art crime unit, The New York Times reported. [See Photos of the Terra-Cotta Warriors]

According to that affidavit, Rohana put his arm around one of the statues and took a selfie, the Times reported.

On his way out of the exhibit, Rohana allegedly grabbed a (very expensive) souvenir — the thumb from the left hand of one of the warriors — a statue valued at about $4.5 million, according to the Times.

Museum staff realized the missing thumb on Jan. 8, National Geographic News reported. Authorities retrieved the thumb from Rohana, who reportedly had it in a desk drawer in his bedroom in Bear, Delaware. He has been charged with theft and concealment of artwork from a museum and the transportation of stolen property across state lines.

The Shaanxi Cultural Heritage Promotion Center, which oversees such exhibitions abroad, is pushing for a tough penalty for Rohana, who was released on bail on Feb. 18, the Times reported.

"We call on the United States to severely punish those who have done so to undermine and rob the human cultural heritage. We also believe that the United States will punish the parties according to law," an unidentified official told the Communist Party-affiliated Beijing Youth Daily, as translated online.

Farmers discovered the army while digging a well in 1974 near the city of Xi'an in China's Shaanxi province. The statues were standing guard in three pits beneath the workers' feet.

Since the discovery of the army, scientists have excavated and studied about 2,000 of the approximately 8,000 guards. In 1987, the site was named a UNESCO World Heritage site.