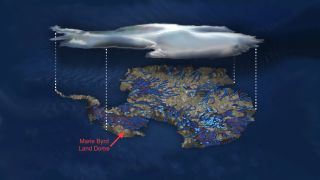 Imagine drifting over Antarctica's icy expanse. A white continent extends below you, and it's smothered in enough frozen water to drown every coastline in the world in a 216-foot (66 meters) wave if it were to melt. But scientists now believe that, deep beneath almost 1.2 miles (2 kilometers) of ice and a relatively thin slice of rocky crust, one region of the frozen continent hides a column of red-hot magma, straining toward the surface, according to a new study.

Usually, magma nears the surface only at the edges of tectonic plates. And West Antarctica's Marie Byrd Land, where the plume is suspected to exist, is far from any such border regions. However, there are places in the world where magma reaches toward the surface far from any tectonic border regions, NASA scientists said in a Nov. 7 statement. Yellowstone National Park is one. Hawaii is another. All that magma pushes against the crust in those parts of the world, causing it to bulge and pumping heat up through the ground.

Despite its apparent icy stillness, Antarctica is alive with motion. Huge masses of frozen water slip, slide and grind with enormous pressure against the continent below, their constant motion lubricated by a complex system of rivers and lakes below the ice.

But in Marie Byrd Land, researchers found even more of that activity than the known regional heat sources could explain. Something else was cooking the ice shelf. About 30 years ago, researchers first began to suspect that a magma plume might be the cause, given the domed shape of the crust in that area.

Now, scientists know for sure.

Study researchers Hélène Seroussi and Erik Ivins of NASA's Jet Propulsion Laboratory built a model of all the known melting and freezing under the ice in the region. Researchers don't have probes under the ice, but they can detect the activity thanks to careful measurements of the rise and fall of the surface from NASA's ICESat satellite and IceBridge flyover missions. [Extreme Antarctica: Amazing Photos of Lake Ellsworth]

This magma plume isn't an alternative possible cause of recent upticks in melting along the West Antarctic Ice Sheet attributed to human-generated climate change. The plume is far older than the recent period of atmospheric warming; indeed, at 50 million to 110 million years old, it's older than our species and the West Antarctic Ice Sheet itself. The plume has been a factor in the ice sheet's behavior throughout its history, and recent surges in melting are the result of all the additional heat humans have pumped into it.

The study was published online Sept. 4 in the Journal of Geophysical Research: Solid Earth.