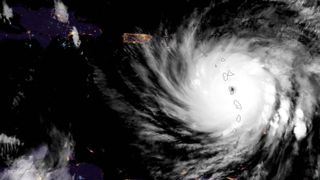 NOAA GOES-16 satellite captured this image of Hurricane Maria as it made landfall on the Caribbean island of Dominica on Monday evening (Sept. 18).
(Image: © NOAA)

September was a doozy for hurricanes. By one measure, it was the most active month on record for the Atlantic Ocean, thanks, in particular, to two Category 5 monsters. But as the calendar has turned over into October, the Atlantic has gone quiet.

This welcome respite from the tropical onslaught comes courtesy of a shift to less favorable conditions for storm formation, several experts said. But hurricane season is far from over, and the Atlantic Ocean is sure to see more activity, they warned.

August, September and October mark the climatological peak of the Atlantic hurricane season, which stretches from the beginning of June to the end of November. That means those months, particularly September, tend to be when most of the hurricane action happens. This September "was like peak season on steroids," Klotzbach said. [Hurricane Maria's Aftermath: Photos Reveal Devastation on Caribbean Islands]

All four tropical storms that formed during the month — Irma, Jose, Katia and Maria — became hurricanes, and three stepped it up a notch to become major hurricanes of Category 4 or greater. (Katia was the exception.) Irma and Maria reached Category 5 strength, the highest possible rung. It's a fairly rare feat for a hurricane to reach Category 5 strength, and even rarer for a storm to hit the blistering 185 mph (298 km/h) sustained wind speeds achieved by Irma. In fact, only four other known Atlantic storms have ever done so.

Moreover, Irma and Maria moved a combined 1,500 miles (2,400 kilometers) as Category 5 storms, according to The Washington Post's Capital Weather Gang. That incredible longevity, combined with the storms' bruising power, gave September the highest accumulated cyclone energy (ACE) of any month on record for the Atlantic, according to the National Hurricane Center (NHC). That energy is a measure of the combined intensity and duration of tropical storms, according to the National Oceanic and Atmospheric Administration (NOAA).

That record-breaking activity was the result of a near-perfect alignment of conditions, with abundant, abnormally warm ocean water and almost none of the wind shear that can tear storms apart, Klotzbach said.

But it's not unusual for an active season to have down periods, said Gerry Bell, the lead hurricane forecaster for NOAA, which is what happened as September came to a close. [The 20 Costliest, Most Destructive Hurricanes to Hit the US]

Over the past week or so, conditions have shifted, Klotzbach said. There's still plenty of warm water, but shear has ticked upward. Air pressure has also been higher over the tropics and more dry air has been brought into the basin by prevailing winds, Bell told Live Science.

On Sept. 30, the NHC issued its last advisory for Maria, which had by then lost its tropical character and was slowly dying in the North Atlantic, marking the first time since Aug. 23 that the NHC didn't have an active storm to forecast.

"September came in like a lion with #Irma and now out like a lamb for October with nada. Hope this break lasts!," NHC forecaster Eric Blake tweeted.

But it's unlikely to, all three experts said. Though we're moving away from the peak of the season and storm activity is expected to taper off, nearly two months of hurricane season remain. (And the dates of the season are artificial; they're meant to encompass the bulk of activity. Storms can still form outside of the official season.)

Further storms could be bad news for areas already pummeled and struggling to recover, especially Puerto Rico, Bell said, which is still in dire straits two weeks after Hurricane Maria swept through. More than 90 percent of the island is without power; there are shortages of food and fuel; and debris and damage to roads have made it difficult to access more isolated areas, according to news reports.

"There's a long way to go" in the season, and "people should not let their guard down" Bell said. "I'm not letting my guard down; that's for sure."