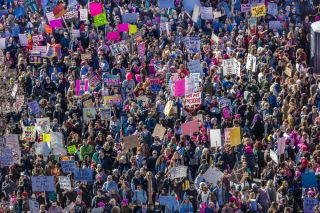 An aerial view of the Women's March on Jan. 21, 2017, in Los Angeles, California.
(Image: © Joseph Sohm/Shutterstock)

We are witnesses to a modern migration of women scientists into the fraught and partisan landscape of political leadership. As women, and as scientists, we are here to stand up for public truth-telling and the value of the lives of all women — and all marginalized people.

You might ask, why have women stepped up now? Put simply, because today's political climate necessitated it. The election of a man who openly bragged of sexually assaulting women into the most powerful public office in the United States is, for me and many other women across this nation, an unbearable crisis. His reduction of women into categories of "hotness" is nauseating. He has publicly bullied women in leadership and seems to have a vendetta against women's health care. All of these things fuel a horror and rage felt by many women across the country. Put mildly, it is a hard time to be a woman in the United States.

Now, imagine that you are not only a woman, but also a scientist. This presidential administration's war on basic evidence — indeed, on truth telling in public — is an abomination of both public leadership and accountability. If scientists lied in our professional capacity 4.6 times a day, we would be, at the very least, out of a job. The president, however, has done just that, as fact checkers at The Washington Post have shown.

This presidential administration, which publicly attacks the safety of women's bodies and the intellectual currencies of our scientific professions, is the fuel behind emergent scientific activism. We see clear evidence of women scientists' activism in the organization 500 Women Scientists. (I am a board member of this group and a founding organizer of the Seattle-based pod.) Across the nation and world, we are coming newly to the causes of social justice, activism, and community organizing, because of the unendurable reality of living as a woman and a scientist under the administration of President Donald Trump. [In Photos: The Best Signs from the 2017 March for Science]

Science is demonstrably strengthened through intellectual diversity and inclusionary principles. As scientists, our professional identities are dynamic. We can be molecular ecologists, astrophysicists, computational social scientists, geochemists, paleoceanographers, atmospheric modelers … the list goes on and on. Science is a multidisciplinary enterprise these days — and that collaborative approach to the building of new knowledge is not going away.

For example, we would never say, "You biologists, you have no value here. You're dismissed," or, "Geochemists, you are no longer important. Get out of the room." Why? Because in modern science, we are part of a galaxy of intersecting, interconnected fields, and the sum of all of those unique scientific fields represents our working body of knowledge. We are a galaxy of unique scientific identities — and the same is true for the people who constitute the living scientific community that undergirds this knowledge. Scientists are also galaxies. [10 Amazing Women That You Won't Find in History Books]

As Tamika Mallory, co-president of the National Women's March, said recently in a speech to the National Women's Political Caucus, "[I]t is necessary…that our policy platforms, our conversations, our money and everything that we are doing be based upon the experience of the whole and not just the few. The few gets us in trouble every time." That is right – and this is true not just in human life, but also in science. Science is intersectional.

Identity and inclusion through intersectionality

Now, I am a straight, cis-gendered (my personal identity and gender match my birth sex), white woman. I'm also a mother, skier and scientist from the Pacific Northwest. These are the building blocks of my identity. I am not just one of those things; I am the sum of all of them. I intersect, or share, parts of my identity with other women scientists, with other Seattleites, and with other mothers.

However, I do not share, or intersect with, other aspects of many of my female colleagues' identities. LGBTQ women, women of color, women immigrants, disabled women — I do not share their experiences. But that doesn't mean my identity is any more valid than those of my colleagues. It doesn't mean, either, that I cannot extend myself compassionately to better understand the lived experiences of other people.

Intersectional feminism requires us to clearly see the galaxy of intersecting identities around us. And it calls upon us to not align only with our narrow silo of identity — which has historically, shamefully, abysmally come in the form of white women aligning with only other white women. Rather, feminists are called on to align themselves with the galaxy of intersecting identities and lived experiences within which they are nested, and to appropriately frame justice and public policy not only through gender, but also through, for example, race, sexual orientation and class.

For me, the horror of the election of white power, hate and misogyny into the highest public office of the nation fractured and broke through the narrow, privileged paradigm of feminism within which I was trapped. This is a good thing — although I carry around some necessary shame for my latent arrival to the table of human rights and justice. There probably aren't many people who want to hear my story about getting woke. To be sure, as a middle-class white woman, my first job is not to center my experience in the timeline of history, but rather to step back, shut up and listen.

Now, as a scientist and a citizen, it is my job to listen to the people who have never been safe in this country — to the people experiencing racialized violence and institutional racism. To the people and communities pushed aside by white privilege and classist resource hoarding. The work of social justice is not a state of arrival, but rather a difficult, painful and rewarding path. I am trying to walk that path — and so are many of my scientific colleagues.

Privilege of science and public leadership

The value of human life is priceless. The people of this country deserve public leadership that values the lives of everyone, not just straight, white, affluent men. In turn, science too is priceless, and people are inseparable from science. The United States needs public leadership that will make decisions using evidence, data and information, not dogma, innuendo and conspiracy.

Because I have the privilege of writing in public, I will use it to say this: It is worth it to do the right thing. It is worth it to show up for the big problems that have been laid at the world's feet: racism, misogyny, climate change, poverty, disease and violence. A better world is possible.

So, when you see the next woman scientist putting herself on the line to stand up to this administration, maybe you will think, "Ah, here is a great manifestation of the truth of intersectional feminism." Or maybe you will think, "Wow. It is hard and it is worth it to do the right thing." Either way, stand up and follow that woman, because she is what public leadership looks like.