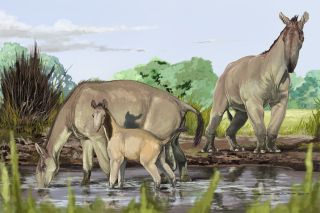 An odd extinct mammal that lived in South America during the last ice age had a long neck like a llama's, three-toed feet like a rhino's and what may have been a tapir-like trunk. This peculiar combination of traits fueled a mystery lasting nearly two centuries about how to classify the bizarre beast.

The Macrauchenia genus has puzzled scientists since Charles Darwin discovered limb bones and vertebrae fossils "of some very large animal" in Patagonia and fancied it to be a mastodon, as he wrote in a letter to his mentor, the naturalist John Stevens Henslow, in March 1834. Upon analyzing Darwin's finds, the scientist Sir Richard Owen declared in a species description published in 1838 that the creature resembled a camel, but uncertainty remained about where Macrauchenia fit on the mammal family tree.

Macrauchenia fossils are fairly plentiful, but paleontologists nonetheless struggled to understand the creature because its combination of features was so unusual, said study co-author Ross MacPhee, curator in the mammalogy department at the American Museum of Natural History in New York.

From these fossils, scientists know that Macrauchenia lived in what is now South America until roughly the end of the Pleistocene epoch (about 1.8 million to 11,700 years ago), and went extinct around 10,000 years ago, MacPhee told Live Science. The long-necked animal was about the size of the average horse, and had a long, narrow skull that was also vaguely horse-like. But its nasal aperture sat squarely between its eyes, leading researchers to speculate that it had either a type of muscular trunk like an elephant's or a fleshy protuberance like a tapir's, MacPhee explained.

Because of these physical features, Macrauchenia was long thought to belong to the branch of the mammalian family tree known as Perissodactyls, which includes tapirs, horses and rhinos. But that group wasn't a perfect fit for Macrauchenia or for other bizarre ice age mammals that were native only to South America, said study co-author Michael Hofreiter, a professor of evolutionary adaptive genomics at the University of Potsdam in Germany.

"These animals are so weird — and their potential relatives are so weird compared to all living mammals," Hofreiter told Live Science. "People went back and forth, and never could put them securely on the tree."

It's not that experts doubted that Macrauchenia was related to Perissodactyls; the trouble was that it looked like it could also be related to a lot of other groups as well, MacPhee said.

Biologists confirm evolutionary relationships of living animals by comparing their DNA. But for paleontologists who are looking at extinct animals, just finding a viable sample of DNA in a fossil can be an enormous challenge (or "a hideous problem," MacPhee said).

"It really depends on the environment," Hofreiter said. Permafrost preserves DNA extremely well, so in those areas, paleontologists can be fairly confident that most fossils will have some viable DNA. But near the equator, where organic matter degrades quickly in the warm, moist environment, hardly any fossils have DNA, he said.

"In between these extremes, it depends on local conditions," Hofreiter said.

And even then, there are limits to DNA preservation; it's unlikely to be preserved for more than a million years, according to MacPhee. That may sound like a staggering amount of time, but in geologic terms, a million years is barely any time at all, MacPhee said.

That sample was about 2 to 3 percent DNA from Macrauchenia, with the rest belonging to assorted microorganisms that had colonized the bone, Hofreiter told Live Science. From that sample, the study authors recovered about 80 percent of Macrauchenia's mitochondrial genome, offering them more precise points of comparison to the Perissodactyl group, to see whether the odd species belonged there.

The researchers learned that Macrauchenia is, in fact, closely related to horses, rhinos and tapirs. However, it is not part of the Perissodactyl group, they found. The odd animal shared a common ancestor with Perissodactyls that dates to roughly 66 million years ago, but around that time, it split off into its own lineage, which died out during the last ice age and left no relatives alive today.

Unlike side-by-side comparisons of physical features in fossils, molecular paleontology can provide definitive answers about genetic relationships, eliminating much of the uncertainty about which animals are related, MacPhee said.

"It gives you 'yes' and 'no' answers instead of lots of 'maybes,'" he said. [What the Heck?! Images of Evolution's Extreme Oddities]

A separate study from 2015 found genetic evidence suggesting that Macrauchenia's lineage diverged from Perissodactyls more than 60 million years ago, which the authors discovered by evaluating proteins extracted from collagen in fossils.

But using preserved collagen in this way is still a relatively new process — only a few years old — and the new findings corroborate the 2015 results using more traditional mitochondrial DNA analysis, MacPhee said.

Resolving where extinct oddballs like Macrauchenia fit on the tree of life answers important questions about ancient evolutionary relationships and biodiversity, and offers insight into how biodiversity millions of years ago came about — and how it could disappear, Hofreiter told Live Science.

"In the Pleistocene, we lost an entire branch of the mammalian family tree — one evolutionary lineage that existed since the age of the dinosaurs," Hofreiter said. "That's quite a substantial part of biodiversity lost at that time, and we wouldn't know this if we didn't have the phylogenetic tree for those species."

The findings were published online today (June 27) in the journal Nature Communications.