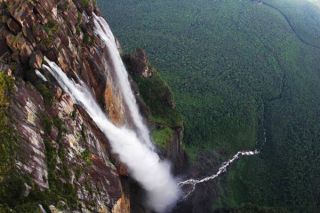 View from above the Angel Fall, the largest waterfall in the world, located in the Auyantepuy Massif in Bolivar state in the south of Venezuela. These titanic mountains in northeastern Amazonia were formed roughly at the time of the opening of the Atlantic (c. 135-100 Ma). Although this is a species rich region, it is relatively less diverse than Andes dominated (younger) western Amazonian region.
(Image: © Luis Carillo, Venezuela)

The extraordinary biodiversity seen in the Amazon rainforest — one of the most species-rich ecosystems on Earth — may have evolved mainly due to the rise of the Andes, research suggests.

The Amazon, the world's largest river basin, is home to the largest rainforest on Earth, covering about 2.58 million square miles (6.7 million square kilometers) in nine countries. This area, known as Amazonia, holds a mind-boggling array of life, harboring one in 10 known species in the world and one in five of all birds.

"Many previously unseen species are discovered and documented every year," said John Lundberg, curator of ichthyology at the Academy of Natural Sciences in Philadelphia.

The origin of the amazing level of diversity seen in Amazonia has been debated for decades. It was long held that isolated patches of forest served as safe havens during cycles of aridity during the Pleistocene epoch (beginning about 2.5 million years ago and ending 12,000 years ago), refuges that served as incubators for diversity over the past 2.5 million years. However, in the 1990s, support for this idea crumbled after evidence for it was revealed to be a mistake based on how species were analyzed.

Now, recent findings regarding the timing of changes in Amazonian diversity coupled with research into the slow rise of the Andes Mountains suggests the growth of this mountain range had a profound effect on Amazonia, with the area's diverse nature emerging well before the Pleistocene era — far earlier than previously thought.

The Andes began their rise about 34 million to 65 million years ago, when the tectonic plate diving under the Pacific edge of South America caused uplift. The rising mountains that resulted from the uplift blocked humid air from the Atlantic, eventually increasing rainfall along the eastern flank of what became the Andes that eroded nutrient-loaded soils off the mountains. The Andes also kept water from draining into the Pacific, helping form vast wetlands about 23 million years ago that were home to a wide range of mollusks and reptiles.

The global drop in sea levels and temperatures that started roughly 10 million years ago led the wetlands to dry up some 7 million years ago, after which point their rich soil became open to colonization by rainforests and a rapidly diversifying collection of trees and other plants. Further uplift of the Andes in the last 2.5 million years or so shifted river patterns and helped create varied landscapes that fostered even more diversity of life. The emergence of the Panama isthmus connecting North America and South America 3.5 million years ago also led new mammals and birds to immigrate, completing the picture of Amazonia we have today, researchers suggest.

The immense rainforest still holds many secrets, said palaeoecologist Carina Hoorn of the University of Amsterdam in the Netherlands. "Comparative work between modern and fossil forests is still needed to fully comprehend the evolution of the tropical rainforest," she told OurAmazingPlanet.

Hoorn, Lundberg and their colleagues detailed these recent findings in the Nov. 12 issue of the journal Science.