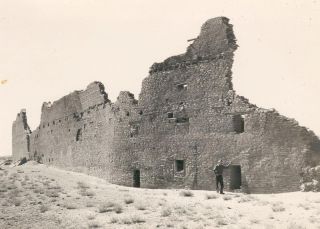 The "Chaco Culture," as modern-day archaeologists call it, flourished between roughly the 9th and 13th centuries A.D. and was centered at Chaco Canyon in what is now New Mexico.

The people of the Chaco Culture built immense structures that at times encompassed more than 500 rooms. They also participated in long-distance trade that brought cacao, macaws (a type of parrot), turquoise and copper to Chaco Canyon. [Related: Chaco Canyon Photos: The Center of an Ancient World]

The people of the Chaco Culture did not use a writing system and as such, researchers have to rely on the artifacts and structures they left behind, as well as oral accounts that have been passed on through generations, to reconstruct what their lives were like.

Archaeologists generally agree that Chaco Canyon was the center of Chaco Culture. Today the canyon is a national park and a UNESCO World Heritage Site. The National Park Service estimates that there are about 4,000 archaeological sites in the park, including more than a dozen immense structures that archaeologists sometimes call "Great Houses." Archaeological research has revealed many discoveries, including a system of roads that connected many Chaco Culture sites, and evidence of astronomical alignments that indicate that some Chaco Culture structures were oriented toward the solstice sun and lunar standstills.

"There has been more archaeological research conducted in Chaco and on the subject of Chaco than on any other prehistoric district in North America," says a National Park Service statement posted on Chaco Culture National Historical Park's website.

"Today, twenty Puebloan groups in New Mexico, as well as the Hopi in Arizona, claim Chaco as their ancestral homeland and are tied to this place through oral traditions and clan lineages. A number of Navajo clans are also affiliated with Chacoan sites through their traditional stories," the National Park Service statement said.

Despite the fact that there has been an immense amount of archaeological research carried out at Chaco Canyon, and at other Chaco Culture sites in the American Southwest, modern-day archaeologists disagree over what the people of the Chaco Culture were like.

Some archaeologists think that the people of the Chaco Culture were not politically united, while some think they controlled an empire centered on Chaco Canyon. "What was Chaco? Opinions vary widely, perhaps wildly. Interpretations range from a valley of peaceful farming villages to the monumental capital of an empire," wrote Stephen Lekson, a professor at the University of Colorado Boulder, in an article published in the book "The Architecture of Chaco Canyon, New Mexico" (University of Utah Press, 2007).

Around A.D. 875, there was a large population increase in the area around Chaco Canyon, noted Thomas Windes, a research associate at the New Mexico Office of Archaeological Studies, in a paper published in the book "The Architecture of Chaco Canyon, New Mexico" (University of Utah Press, 2007). Windes found that the amount of refuse rapidly increased, indicating that the population in the area jumped suddenly. "Something dramatic happened," Windes wrote.

While archaeologists are not certain what caused this dramatic population bump, they know that it helped give birth to the Chaco Culture. "The first great houses rose in the late ninth and early tenth centuries; then followed a hiatus of almost a century, and an explosion of construction between about 1020 and 1125," wrote Lekson in his paper. Earthen materials, stone and timber were used to build many of the Chaco Culture structures archaeologists have found.

Many of the Great Houses were built in Chaco Canyon. One of the houses, which is known today at "Pueblo Bonito," may have had more than 600 rooms. This includes several "Great Kivas" (as archaeologists call them), which are massive circular rooms that may have been used for meetings and ceremonies. It also includes crypts that housed over 100 burials. [Related: Chaco Canyon Photos: Amazing Ruins from an Ancient World]

"Pueblo Bonito is a structure that overwhelms. With its enormous size, complex design, and fine masonry, the building, even in ruin, clearly represents an impressive engineering and aesthetic feat," wrote Jill Neitzel, a professor at the University of Delaware, in a paper published in the book "The Architecture of Chaco Canyon, New Mexico" (University of Utah Press, 2007).

Neitzel noted that Pueblo Bonito was built beside a 30-meter (98 feet tall) stone monolith that collapsed in the 1920s. The discoveries made at Pueblo Bonito over the last century include the remains of a lone pine tree that may have had symbolic importance and numerous rooms that may have been used for storage.

However, the purpose and population of Pueblo Bonito remains uncertain. Some archaeologists think that it held over 1,000 individuals, while others think that as few as 70 people may have lived there. "Recent architectural analyses have suggested that, in addition to being an elite residence and a ceremonial center, Pueblo Bonito was also a storage facility," wrote Neitzel.

The rise of Chaco Culture brought an influx of trade goods to Chaco Canyon and nearby areas. A recent study found that scarlet macaws, a colorful parrot, were being brought to Pueblo Bonito from Mesoamerica by the late 9th century A.D. in trips that took at least 1,500 kilometers (932 miles).

Scarlet macaws would have been a fantastic luxury item that may have helped determine who at Chaco Canyon belonged to an elite class. These class divisions were "reinforced during the late ninth and 10th centuries by the acquisition of scarlet macaws and other cosmologically powerful agents from Mesoamerica," said Stephen Plog, a professor of archaeology at the University of Virginia and one of the study co-authors, in a press release issued by the American Museum of Natural History.

Cacao, the principal ingredient in chocolate, was also brought from Mesoamerica to Chaco Canyon by A.D. 900, research indicates. It was consumed as a drink out of jars that have designs similar to those found in Mesoamerica.

Chocolate and scarlet macaws were just the tip of the iceberg, as archaeologists have found items made of turquoise, copper and shells that would have been made of material imported some distance away. Even the timber used in the buildings was imported.

A University of Arizona study found that before A.D. 1020, most of the wood used at Chaco Canyon came from the Zuni Mountains, which are located about 50 miles (80 km) to the south, while after A.D. 1060 much of the wood came from the Chuska Mountains about 50 miles to the west. The amount of wood imported to Chaco Canyon from these areas was immense. "The casual observer will see hundreds and hundreds and hundreds of beams sticking out of the walls. There's wood all over the place in these structures," said lead author Christopher Guiterman, a doctoral candidate at the University of Arizona, in a press release.

A recent study indicates that power at Pueblo Bonito appears to have been passed through maternal lines. In other words belonging to the elite depended on who your mom was, not on who your dad was.

The discovery was made by performing DNA analysis of nine individuals who were buried in a crypt at Pueblo Bonito. The crypt contains thousands of beads made of shell and turquoise, and many archaeologists think that the individuals buried in the crypt were part of an elite family that held some degree of power at Pueblo Bonito.

The DNA analysis revealed that all nine individuals were related maternally and, collectively, the nine individuals appear to have lived between roughly 800 and 1130. They may have formed a dynasty of sorts at Pueblo Bonito.

Chaco Culture sites declined in the 13th and 14th centuries, gradually becoming abandoned. At Pueblo Bonito "complete abandonment in the 1300s was marked by a variety of termination and closure rituals including widespread burning," wrote Neitzel.

Research indicates that the American Southwest was hit by a series of droughts around this time that may have brought about the end of the Chaco Culture, uprooting people and forcing them to move to locations that still had water. Mesa Verde, a region that straddles Colorado, Utah and New Mexico thrived during the 13th century and some people who lived at Chaco Culture sites may have relocated there.

There are "no obvious indications that the depopulation of the canyon in the 13th century was caused by any specific cultural practices or natural events," the researchers wrote in the journal article. "Clearly there was a reason why these farming people eventually moved elsewhere, but the archaeological record has not yet produced compelling empirical evidence for what that reason might have been."

Today, Chaco Canyon is a national park and national monument, giving its ruins protection from development. In 2013, Chaco Canyon was declared a dark sky park, a designation intended to keep it free of light pollution, allowing visitors to see the stars.

However, Chaco's national monument status may not protect it from all forms of development pressures. Recently, permission was given for fracking, a drilling technique that extracts oil or gas from deep underground, to take place near Chaco Canyon. The Navajo are challenging this decision noting that the pollution that fracking causes threatens the ruins and the people who live in the broader area.