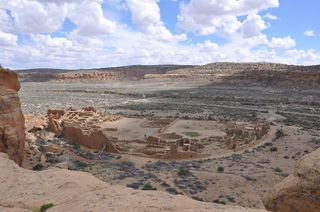 Hundreds of years before Christopher Columbus landed in the New World, a complex society in what is now New Mexico passed down power through its maternal line, a new study finds.

The finding is a remarkable one, as the ancestral Puebloan society at Chaco Canyon didn't leave a written record of its way of life. Rather, scientists made the discovery by analyzing the genomes of nine individuals who were buried in elaborate graves. The researchers found that all were related through a maternal line, according to the study.

Moreover, the matrilineal dynasty wasn't a short fluke; it lasted 330 years, from A.D. 800 to 1130, when the society collapsed, the scientists found. [See Photos of the Culture that Chose Rulers Based on the Mother's Line]

Researchers carried out the investigation on a crypt found in the Pueblo Bonito settlement, a multistoried masonry building, containing about 650 rooms, that archaeologists first excavated in 1896. Since then, researchers have wondered how the people at Pueblo Bonito governed themselves — that is, whether they had patrilineal or matrilineal dynasties, or if they chose leaders based on abilities and achievements.

Earlier work showed that the grandest grave in the crypt contained the remains of a man in his 40s who died from a lethal blow to the head. The man's body was found in the center of the room, adorned with more than 11,000 turquoise beads; 3,300 shell beads; and other artifacts, including several abalone shells from the Pacific Coast, making it "the richest burial known in the North American Southwest," the researchers wrote in the study.

Researchers studied the genomes of nine individuals within the crypt to determine whether they were related, said study lead researcher Douglas Kennett, a professor of environmental archaeology and head of the Department of Anthropology at Pennsylvania State University.

"We used [a] unique combination [of] high-resolution radiocarbon dating in combination with state-of-the-art genomics technology to address these questions," Kennett told Live Science in an email.

The results showed that the nine people had identical mitochondrial DNA, genomic material that mothers pass down to their children, which indicated that the society had a matrilineal dynasty.

These results show that the Chaco ascribed to a popular form of government, as matrilineal systems are still present in the western Pueblos (Hopi, Zuni, Acoma and Laguna) and the Rio Grande Pueblos (Cochiti, San Felipe, Santo Domingo and Zia), the researchers wrote in the study.

What's more, Spanish colonial records and Pueblo oral traditions, mainly among the Hopi and Zuni, "emphasize matrilineal clans as the founding social units and matrilineal leaders as key protagonists in social history," the researchers wrote in the study. [Chaco Canyon Photos: The Center of an Ancient World]

In addition, the researchers analyzed the individuals' regular DNA to look for familial relationships.

"Using DNA sequences from the nuclear genome combined with the radiocarbon dates, we identified a mother-daughter pair and a grandmother-grandson relationship," Kennett said in a statement.

"For the first time, we're saying that one kinship group controlled Pueblo Bonito for more than 300 years," Plog said in the statement. "This is the best evidence of a social hierarchy in the ancient Southwest."

The study was published online today (Feb. 21) in the journal Nature Communications.