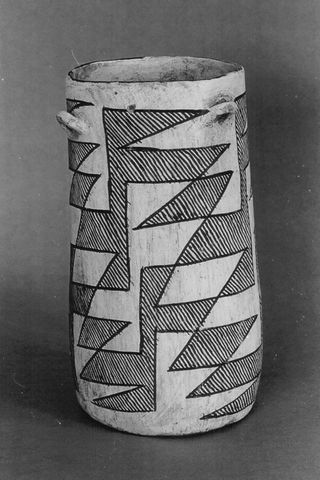 A cylinder jar from Pueblo Bonito in Chaco Canyon. This was among the 75 jars tested for traces of cacao.
(Image: © James Garber)

Roughly 1,000 years ago, residents of pueblos in the American southwest appear to have had an appetite for imported chocolate, according to new research. The finding, based on chemical traces found in clay pots, is evidence of a strong connection between the southwestern puebloans and the ancient civilizations of Mexico and Central America.

This early version of chocolate was already known to be well-established thousands of miles to the south of what is now the southwestern United States. The Mayans, Aztecs and other ancient people from Mesoamerica (Mexico and Central America) used beans from the native cacao plant to make a ceremonial drink, which they served frothy.

Until now, however, the evidence of cacao in the American southwest was limited. And since cacao does not grow outside the tropics, the discovery of plentiful traces of it far to the north indicates there was extensive trade between these distant societies, according to the researchers led by Dorothy Washburn, of the University of Pennsylvania Museum of Archaeology and Anthropology.

"In order for so much to be present in the sample — two-thirds of 75 pots we looked at had cacao in them — there must have been a much greater degree of interaction between these areas," Washburn said. "People move great distances if they wanted something badly enough."

With the help of William Washburn (her husband) and Petia Shipkova, both chemists at Bristol-Myers Squibb, Washburn examined 75 pots for three chemicals present in cacao: theophylline, caffeine and theobromine.

The vessels they examined came from the elite burial sites at Pueblo Bonito in roughly A.D. 900, and from the platform mound site of Los Muertos in Arizona. The latter is believed to have been the residence of elites among the Hohokam, an agricultural people, in the 14th century. They also tested eight pots from small pueblos that would have been inhabited by common folks.

The commoners' vessels, which did not have the Mesoamerican influenced shape and design, yielded the most significant find — all tested positive for theobromine, a signature for cacao.

"That is what made me think everybody is drinking this, there must be an incredible amount of trade bringing this stuff up," Dorothy Washburn said.

She believes the puebloans traded for the cacao with their fine turquoise, a stone that replaced jade as a favorite among Mesoamericans around the year 900. The chemical signature of turquoise from New Mexican mines has been found in pieces in several sites in Mexico, including the Mayan site Chichen Itza, the researchers write in a study that appears in the Journal of Archaeological Science.

This is not the first sign of cacao the American southwest. A 2009 study, done by archaeologist Patricia Crown, of the University of New Mexico, and W. Jeffrey Hurst a chemist for the modern chocolate maker Hershey Company, uncovered chemical evidence of cacao in shards from cylinder jars from Pueblo Bonito, an 800-room pueblo within Chaco Canyon in New Mexico.

Washburn, who studies the structure of designs on pottery, has also seen other clues of Mesoamerican culture in the southwest. The jars found in the elaborate, multistory pueblos of Chaco Canyon have a cylindrical shape and sophisticated decoration quite different from earlier local pots; in fact, they resembled cylinder jars used in Mesoamerica to consume cacao.