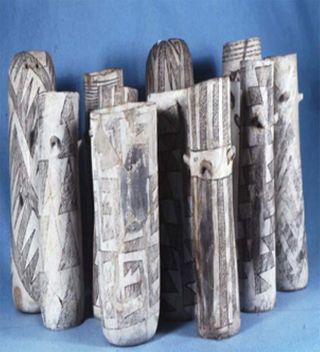 The residues, found on pottery shards excavated from a large pueblo (called Pueblo Bonito) in Chaco Canyon in northwestern New Mexico, suggest the practice of drinking chocolate had traveled from what is now Mexico to the American Southwest by about 1,000 years ago.

Scientists have known about the early uses of chocolate in Mesoamerica, with evidence for rituals involving liquid drinks made from cacao beans dating back more than 1,000 years. (Mesoamerica extends from central Mexico to Honduras and Nicaragua.)

Now, researchers think a similar ritual may have taken place in villages in Chaco Canyon. Patricia Crown of the University of New Mexico and Jeffrey Hurst of the Hershey Center for Health and Nutrition found traces of theobromine, which is in the Theobroma cacao plant that bears beans from which chocolate is made, on the shards. (The Hershey Center was established by the Hershey Company in 2006.)

And Crown and Hurst suspect the shards came from cylinder jars, which measure an average of 10 inches tall (25 cm) and 4 inches (10 cm) wide. Only 200 such cylinder jars are known in the Southwest United States, almost all of which come from Pueblo Bonito.

Scientists have put forth various explanations for how the jars were used, including as containers to hold exotic items like turquoise and as drums (with a skin cover).

"If it was the form specifically used for drinking cacao, that would explain why it's such a specialized form," Crown said, referring to the jars.

In Mesoamerica, residents would make the drinks by grinding up roasted cacao beans and adding hot or cool water. Sometimes other ingredients, such as honey for sweetening, cornmeal and even chili peppers, were added. The researchers are not sure if any other ingredients were mixed in with the Chaco Canyon drinks.

Since the cacao plant is tropical and can't be grown in New Mexico and other places in the United States, the researchers think the chocolate beans came from Mesoamerica, with the closest source being about 1,240 miles (2,000 km) away from the Chaco site.

Next, Crown and Hurst hope to test wooden sticks found at the site for chocolate residues. The sticks have loops at the bottom, and Crown says perhaps they were used to stir and froth the chocolate drinks.

"An important thing in Mesoamerica was stirring it up so it had a froth in it," Crown told LiveScience. "The froth was considered the most delicious part of the drink."

The research pair also wants to analyze other material from different time periods and areas in the Southwest.   "It is the first known cacao north of the Mexican border in the United States, and as far as I know the only known cacao in the United States before contact," Crown said, referring to the time before European settlement of the area. "Unfortunately it's also the only cacao residue study that anyone has done using U.S. materials, so we need to find out how widespread chocolate was prior to contact in the American Southwest."

The new research is detailed this week in the journal Proceedings of the National Academy of Sciences. The research was funded by the National Science Foundation, National Geographic Society, University of New Mexico and Hershey's Technical Center, among others.