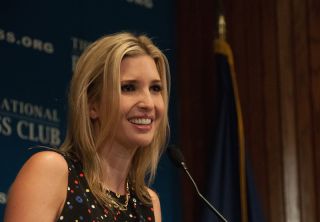 Ivanka Trump just had to trademark her name in China to avoid copyright copycats, but she doesn't have to worry that new parents will infringe on her turf: The name Ivanka is wildly unpopular in the United States.

In 2015, only about 20 in 1 million babies were named Ivanka, according to U.S. Social Security Administration data. In 2016, pregnancy and parenting site BabyCenter saw a spike in interest in the name Ivanka, possibly driven by the soon-to-be first daughter, but the name fell nearly 1,800 spots in popularity so far this year, and now sits at No. 3,818 in that site's popularity ranking. (The BabyCenter ranking measures interest in a name based on what names people say they will use, but does not use actual birth certificate data, so it is not a fully reliable indicator of name prevalence.)

One reason for the name's unpopularity may come from the way the consonants in the name sound, said Laura Wattenberg, author of the book "The Baby Name Wizard" (Three Rivers Press, 2005) and creator of the website BabyNameWizard.com. [7 Baby Myths Debunked]

"That N-K is just a nonstarter," Wattenberg said. "There is literally no fashionable name with the letters N-K [in succession] for either sex at this point — like 'Frank' is at an all-time low."

The Trumps may be a particularly controversial family — Ivanka Trump's most recent trademark efforts were in the news because the first daughter was granted the trademarks while she and her husband were at dinner with the Chinese president. But ever since President Richard Nixon's Watergate scandal, Americans have largely eschewed naming their babies after political figures, especially the names of politicians who are still living, Wattenberg told Live Science. Until about the middle of the 20th century, the winners of presidential elections reliably produced naming bumps; there were surges of little Clevelands, Wilsons and even Roosevelts. That's not true today.

"There was a clear turning point in American history where we went from routinely naming after political and military leaders and avoiding them at all costs," Wattenberg said.

One reason may be a "certain cynicism about politics," Wattenberg said. But perhaps a more influential factor is that Americans have changed the ways they approach naming.

"Names are now emblems more of style than meaning," Wattenberg said. People no longer name their babies after their fathers or grandfathers nearly as often as in the past, either. To the extent that babies do get presidential names, the reason rarely seems to track with a political stance. "Kennedy," for example, was the 57th-most-popular name for girls in the U.S. in 2015. But it wasn't blue-state residents honoring a liberal president who were driving the trend. "Kennedy" shows up in the top 100 baby girl names in Alabama, Texas, Utah and Tennessee, to name a few conservative strongholds. The name doesn't crack the top 100 in JFK's home state of Massachusetts.

The politics of naming

Children of presidents do sometimes start small trends in naming, Wattenberg said. Social Security data shows that Malia and Sasha jumped in popularity during the Obama administration. In the U.S., the name Malia, which had been slowly gaining in popularity since the mid-1990s, jumped from No. 344 in 2008 to No. 191 in 2009. Sasha, which had been more steadily familiar since the 1970s, jumped from No. 360 in 2008 to No. 261 in 2009. The names Ruth and Esther similarly saw popularity surges when these daughters of Grover Cleveland lived in the White House back in the late 19th century, Wattenberg said. [6 Politicians Who Got the Science Wrong]

"Ivanka is different," she said. "She's not a little girl, and she's an explicitly political figure."

Those two factors would make Ivanka less appealing as a namesake even if her name hadn't been too consonant-rich to mesh with parents' current preference for melodious, vowel-filled names, Wattenberg said.

Perhaps the trendiest Trump names are those of the first lady, Melania, and first son, Barron. Both have remained largely out of the spotlight, but their names are poised for the big leagues. Melania is a flowing "liquid name" that fits well alongside popular choices like Aaliyah and Arianna, Wattenberg said, while Barron is an ambitious "exalted" name, and calls to mind royalty and divinity. (Other examples include King, Royal, Noble and Marvel.)

"Those are two hot styles right now, so if any Trump family names do rise, they're the likeliest candidates," Wattenberg said.

The rest of the Trump family is unlikely to kick-start any naming trends. Jared, Ivanka's husband, has a classic 1980s name that is a "dad name today," Wattenberg said.

Tiffany, Trump's daughter with ex-wife Marla Maples, has another name that has already peaked. It hit a high at No. 13 on the popularity charts in 1982 and had dropped to No. 494 as of 2015. Eric, another Trump son, has a name that ranked at a respectable No. 137 in 2015, but that formerly popular boy pick has been sliding since the 1970s.

Meanwhile, "Donald" is a name that is "well into grandpa territory," Wattenberg said. "Even Donald Trump — he's a little young for a Donald."