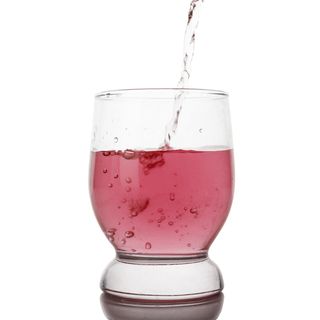 Earlier this week, denizens of a small Canadian town got a surprise when they opened their kitchen taps and flushed their toilets.

The water had turned a bright, Barbie-doll pink.

While the pink water may weird people out, it's not a health risk, Alberta Health Services (AHS) told The Globe and Mail. However, the compound does carry a small risk of temporary skin irritation, so people with sensitive skin might not want to bathe in it, AHS told Global News in Edmonton.

As people posted photos of the fuchsia-hued water on social media on Monday (March 6), the Public Works Department of Onoway, a town of about 1,000 people in Alberta, Canada, got to work. Before long, the agency announced that a compound called potassium permanganate was responsible for the water's rosy tinge, said Dale Krasnow, the town's mayor. [Through the Years: A Gallery of the World's Toilets]

However, water treated with permanganate usually receives further treatment, such as filtration, because the compound's precipitates (the chemicals it forms when it reacts with iron and manganese) can stain the water itself, the EPA said. Moreover, "it is not desirable to maintain a permanganate residual because of its tendency to give water a pink color," the EPA noted.

In one tweet, reporter Shallima Maharaj showed images of the water on Twitter, saying, "The stages of pink at one household. Alberta Environment to have water speacialist in #Onoway today."

The colorful mistake in Onoway happened during a weekly backwash of filters at the town's water-treatment plant. "It appears a valve may have stuck, allowing the potassium permanganate to get into our … reservoir and thereby into the town's water-distribution system," Krasnow said in a statement.

By the time city officials learned about the problem, the rose-tinted compound had already made its way into the town's water-distribution lines, Krasnow said.

"Pubic Works immediately commenced flushing of all our distribution lines throughout the town," he said. "Unfortunately, our distribution system is a loop system, which makes it much more difficult to control and isolate the water flow."

As of Tuesday, "all main lines have been flushed and are clear. However, there may be some residual [pink water] in your service lines," the local government said in a statement. "Property owners may need to run their water for a few minutes to clear their service lines."