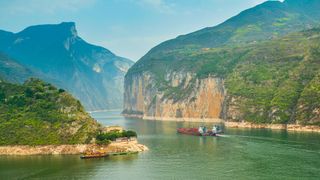 Qutang Gorge is one of the Three Gorges along the Yangtze River.
(Image: © jejim/Shutterstock)

The Yangtze River in China is the longest river in Asia, the third longest river in the world and the longest river to flow entirely in one country. The river begins its journey in the glacial meltwaters of the Tanggula Mountains in Tibet and flows approximately 3,915 miles (6,300 kilometers) until it empties in the East China Sea near the city of Shanghai. The river flows through or borders 10 provinces.

Yangtze, which means "child of the ocean," is a name primarily used by Westerners. In China, the river is referred to as Chang Jiang, meaning "long river," while the name Yangtze is reserved for the small section of the river near its mouth.

The river flows through a variety of terrains, including high plateaus and lowland plains, but most of its journey — approximately three-fourths of it — is spent passing through mountainous regions, including some extremely scenic areas with deep valleys, canyons and gorges. The river is fed by approximately 700 tributaries, including eight principal rivers: Yalung, Min, Jialing, Han, Wu, Yuan, Xiang and Gan rivers, according to the Encyclopaedia Britannica.

The Yangtze plays a central role in Chinese agriculture, industry and travel. It is the country's primary waterway, and nearly one-third of the population lives in its basin — an area covering about 448 million acres — according to the World Wildlife Fund (WWF). Traditionally, the Yangtze River has been considered a dividing line between North and South China, although geographers consider the true line to be the Qinling-Huai River, according to the New World Encyclopedia.

The Three Gorges Dam, completed in May 2006, is the world's largest hydropower station, according to International Water Power & Dam Construction magazine. It measures 630 feet (192 meters) high and 1.4 miles (2.3 km) across. The dam is located about 1,000 miles (1,610 km) west of Shanghai, in the Three Gorges Region, an area widely considered the most scenic region in the Yangtze River. The Three Gorges (three narrow, adjacent valleys) are situated along the middle reaches of the river.

In general, the dam was built to produce electricity, increase shipping capacity and reduce the potential for dangerous floods; however, according to the organization International Rivers, the dam is quite notorious for its own role in causing environmental disasters and displacing people. The project set a record for the number of people displaced (more than 1.2 million) and the number of civilized areas flooded (13 cities, 140 towns, 1,350 villages), according to International Rivers. Unfortunately, the rising waters due to the construction of the dam submerged many ancient archaeological sites and caused the loss of ancient relics.

The average yearly rainfall in the Yangtze River basin is around 43 inches (1,100 millimeters), according to Encyclopaedia Britannica. In the middle and lower regions of the river, most of the precipitation falls as rain, particularly during the warm summer monsoons. In the mountainous areas, precipitation is primarily snow.

The river volume fluctuates widely, depending on the time of year and the section of the river. Upstream, the average flow is about 70,000 cubic feet (1,980 cubic meters) per second, according to Encyclopaedia Britannica. Farther downstream, as more tributaries join the primary stream, the volume gradually increases.

Before the completion of the Three Gorges Dam, water volume in the Yangtze was about 529,000 cubic feet (15,000 cubic meters) at the end of the Three Gorges region and up to 1,100,000 cubic feet (31,100 cubic meters) at its mouth, according to Encyclopaedia Britannica. These numbers have decreased somewhat due to the dam. The suspended sediment load (sediment that is carried in the water flow and never quite settles on the bottom) at the mouth of the river is about 478 million tons a year — one of the highest sediment loads of any river on earth.

The Yangtze River basin, an area covering 448 million acres, is one of the most biodiverse regions on Earth — from towering mountains and thick forests to marshy wetlands and waterways, according to the World Wildlife Fund (WWF). The region is home to more than 280 species of mammals, 145 species of amphibians, 166 species of reptiles and 378 species of fish, according to WWF. Species of fish include the yellow head catfish, carp, copper fish, Chinese shad, eel, anchovies and the Chinese puffer fish, according to YangtzeRiver.org. Unfortunately, the International Union for Conservation of Nature lists many of the animals in the Yangtze River Basin on its Red List of Threatened Species. Statuses range from vulnerable (high risk of endangerment in the wild) to endangered (high risk of extinction in the wild) to critically endangered (extremely high risk of extinction in the wild).

The giant panda, which was recently moved from the endangered list to the slightly better status of vulnerable, lives in the bamboo forests of the Upper Yangtze region. Although the giant panda has no natural predators, human activity has led to only a little more than 1,800 in the wild, according to WWF.

The Yangtze River is also home to the vulnerable finless porpoise. Only about 1,000 of them exist in the wild. Their troubles stem from dwindling sources of food and human activity, including boat traffic. These rare porpoises live mainly in the middle and lower reaches of the Yangtze River.

The critically endangered Chinese alligator, which numbers only around 200 in the wild, also lives in the lower regions of the river and its surrounding lakes. Although the Chinese alligator resembles the American gator, it is much smaller, reaching lengths of only 5 feet (1.5 m), according to YangtzeRiver.org.

The Yangtze softshell turtle is the largest softshell turtle in the world and a native of the Yangtze River basin. It is critically endangered, according to the IUCN. There are only three known individuals in existence — two in captivity in China, and one in a lake in Vietnam, according to the Turtle Survival Alliance. In July 2016, efforts to artificially inseminate the last known female were unsuccessful.

The Yangtze River basin is considered the great granary of China. The economy of the basin focuses largely on agriculture, according to Encyclopaedia Britannica. The grains produced here -- 70 percent of which is rice -- is enough to feed half of the country's population, according to Travel China Guide. Other crops grown here include barley, cotton, wheat, corn and beans.

Within the last five decades, China has seen a 73 percent increase in pollution levels in the hundreds of cities surrounding the main stem (primary downstream section) of the Yangtze River, according to WWF. The discharge of sewage and industrial waste has reached 25 billion tons per year -- 42 percent of the country's total sewage discharge, according to WWF.

One of the major pollution issues facing the Yangtze River is the excessive accumulation of phosphorus (P) in the water. Phosphorus is a common ingredient in agricultural fertilizer, manure, and other organic wastes found in sewage and industrial discharge. Although phosphorus is essential to plant life in small amounts, too much of it in the water (often due to soil erosion) speeds up a type of pollution called eutrophication -- explosive growth of algae that depletes the water of oxygen, according to the National Oceanic and Atmospheric Administration (NOAA). Eutrophication can be extremely harmful to river life.

"As with the rest of eastern China, phosphorus inputs via fertilizer runoff, leaching of animal manures, and human wastes have massively eutrophied the Yangtze River and associated water bodies in its flood plain, leading to blooms of algae and cyanobacteria that can pose a health hazard and cause fish kills," said James Elser, a research professor at Arizona State University. His research involves studying how carbon, nitrogen and phosphorus shape the ecology and evolution of living things.

"Furthermore, massive amounts of P have accumulated as 'legacy P' in the Yangtze River catchment, as the amounts of P used as fertilizer in the basin over the past decades greatly exceed the P that has left the basin river outflow and via food shipments," Elser told Live Science. "This legacy P will leave a long-lasting impact even after China brings its P management to a better level."

While discussing what can be done to reduce the damage, Elser said that first, the use of P fertilizer on crops needs to be reduced. He added that current application practices in China add more P than is needed by the crop.

"Second, China needs a massive effort in manure management for its livestock operations. Manure is in great excess in many regions of the country and the manure cannot be returned to fields to fertilize them due to excessive transport costs," he said. "Less meat in the Chinese diet would also reduce the manure production. "

And finally Elser said there needs to be more widespread adoption of wastewater treatment technologies to prevent P losses from cities and towns. "As China develops this infrastructure, recapture of the P in human waste should be incorporated so that P can be re-used rather than just buried in a landfill somewhere," he concluded.