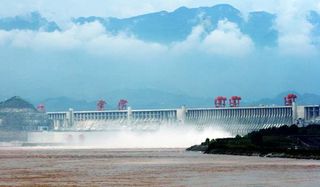 At 50 stories high and with a span of more than a mile, one of the world's largest feats of modern engineering is not a skyscraper. It's a hydroelectric dam.

The Three Gorges Dam in Hubei Province, China, can hold back more than five trillion gallons (19 billion cubic meters) of water, according to NASA.

Three Gorges impounds the Yangtze River about 1,000 miles (1,610 km) west of Shanghai. It's named for its location near the three gorges at the foot of the western Wu Shan Mountains, according to PBS.

Until the Three Gorges Dam's near-completion in 2009, the Guri dam in Venezuela held the title of the world's largest, followed by the Itaipu dam on the border between Brazil and Paraguay, according to International Water Power & Dam Construction magazine.

But the Three Gorges Dam garnered nearly as much media attention for its sheer size as it for the controversy surrounding the project.

Records of engineers envisioning a massive dam near three gorges on Yangtze River date back to 1919, according to the China Three Gorges Project. Yet plans for the dam only took off in 1992, when China's national legislative body, the 7th National People's Congress, voted to start construction.

But the plans were immediately opposed by environmental and political groups.

Creating the dam and the reservoir behind it flooded towns, farmland and historical sites . The China Three Gorges Project planned to relocate 1.13 million people living in the 244 square miles (632 square km) flooded by the dam.

Paying for the relocation added to the estimated $24 billion price tag, according to PBS.

As construction on the dam progressed, scientists noted the toll it took on the environment.

In 2007, geologists told the Wall Street Journal that the weight of water behind the Three Gorges Dam had began to erode the river's shores.

Meanwhile concerns about landslides and a toxic buildup of industrial pollution and sediment behind the dam abound, according to PBS.

But supporters of the dam say it is a boon for the growing energy demands in China. International Water Power & Dam Construction magazine estimated that the Three Gorges Dam has the capacity to generate 22,400 megawatts (MW) of energy. By comparison, the Itaipu Dam has a capacity of 14,000 MW and in the year 2000, provided 94 percent of the energy to Paraguay, according to the U.S. Geological Survey.

Three Gorges Dam supporters also point to the dam's ability to control the Yangtze River's notorious flooding. Floods in 1998 cost the lives of at least 4,000 people, according to news reports. But in the 2010 typhoon season, the Three Gorges Dam was able to withstand 18,492,043 gallons (70,000 cubic meters) of water per second.