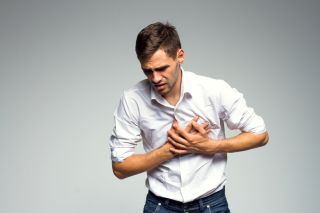 Every day, a slew of previously healthy people experience chest pains and go to the emergency room. But a whole range of events can then follow; some of these people may be having a heart attack and may die later that day, while others will be sent home with medications and live decades longer.

Now, a new blood test could quickly give doctors a sense of a patient's risk for serious heart problems, such as a heart attack or even death, a new study finds.

The test measures the blood levels of a molecule called trimethylamine N-oxide (TMAO), according to the study, published today (Jan. 10) in the European Heart Journal. [Heart of the Matter: 7 Things to Know About Your Ticker]

TMAO is produced when gut bacteria break down foods, including red meat, eggs and dairy, the researchers wrote.

Previous research in animals has linked higher levels of TMAO with greater blood vessel inflammation, and studies done in people with heart disease have shown that individuals with higher levels of TMAO have a higher risk of blood clots, according to the study. However, researchers did not know if TMAO was also linked with an increased risk of blood clots or other outcomes in people who were previously healthy.

In the new study, the researchers looked at TMAO levels in two groups of patients, the first of which included 530 adults at the Cleveland Clinic in Ohio who went to the ER for chest pain. The patients had blood samples taken when they first came to the emergency room, and then again 4, 8 and 16 hours later. The researchers then tracked these patients over the next seven years, to see if they developed heart problems or died, according to the study.

Results showed that, compared with patients who had the lowest TMAO levels when they came to the ER, those with the highest TMAO levels were about six times more likely to die, have a heart attack or stroke, or need blood vessel surgery within the next month, lead study author Dr. Thomas Lüscher, a cardiologist at the University of Zurich in Switzerland, said in a statement.

Lüscher noted that the elevated risk remained even after the researchers accounted for the participants' other heart-disease risk factors, such as age, smoking, cholesterol levels and blood pressure.

The researchers also looked at the patients' levels of a compound called troponin T, which is found in the blood after a person has a heart attack. "Interestingly, even in patients who did not appear to have elevated levels of troponin T when they first arrived at [the] hospital, those with the [highest TMAO levels] still had a nearly six-fold higher risk of a major adverse cardiovascular event," Lüscher said.

The findings have several implications, the study authors wrote.

For example, when patients come to the ER with chest pains, doctors could use a quick blood test for TMAO levels to determine which patients have the highest risk for serious complications, the researchers wrote.

In addition, doctors could target the link between TMAO and heart disease risk to help prevent heart disease, the researchers said. Patients could be encouraged to switch from diets rich in red meat and dairy, which can lead to increased levels of TMAO, study co-author Dr. Slayman Obeid, an interventional cardiologist at the University of Zurich, said in a statement.