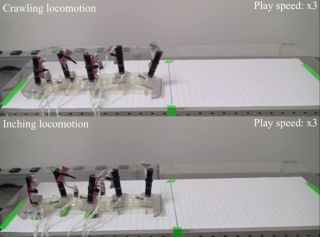 Screenshot of a video showing the caterpillar-inspired "soft" robot, which has a soft body that can move by deforming itself as it interacts with its environment.
(Image: © Umedachi, Takuya; Kano, Takeshi; Ishiguro, Akio; A. Trimmer, Barry (2016))

A soft, caterpillar-like robot might one day climb trees to monitor the environment, a new study finds.

Traditionally, robots have usually been made from rigid parts, which make them susceptible to harm from bumps, scrapes, twists and falls. These hard parts can also keep them from being able to wriggle past obstacles.

Increasingly, scientists are building robots that are made of soft, bendable plastic and rubber. These soft robots, with designs that are often inspired by octopuses, starfish, worms and other real-life boneless creatures, are generally more resistant to damage and can squirm past many of the obstacles that impair hard robots, the researchers said. [The 6 Strangest Robots Ever Created]

"I believe that this kind of robot is very suitable for our living environment, since the softness of the body can guarantee our safety when we are interacting with the robots," said lead study author Takuya Umedachi, now a project lecturer in the Graduate School of Information Science and Technology at the University of Tokyo.

However, soft materials easily deform into complex shapes that make them difficult to control when conventional robotics techniques are used, according to Umedachi and his colleagues. Modeling and predicting such activity currently requires vast amounts of computation because of the many and unpredictable ways in which such robots can move, the researchers said.

To figure out better ways to control soft robots, Umedachi and his colleagues analyzed the caterpillars of the tobacco hornworm Manduca sexta, hoping to learn how these animals coordinate their motions without a hard skeleton. Over millions of years, caterpillars have evolved to move in complex ways without using massive, complex brains.

The scientists developed a caterpillar-like soft robot that was inspired by their animal model. They attached sensors to the robot, which has a soft body that can deform as it interacts with its environment, such as when it experiences friction from the surface on which it walks. This data was fed into a computer that controlled the robot's motors, and the motor could, in turn, contract the robot body's four segments.

The researchers found that they could use this sensory data to guide the robot's inching and crawling motions with very little in the way of guidance mechanisms. "We believe that the softness of the body can be crucial when designing intelligent behaviors of a robot," Umedachi told Live Science.

The scientists detailed their findings online Dec. 7 in the journal Open Science.