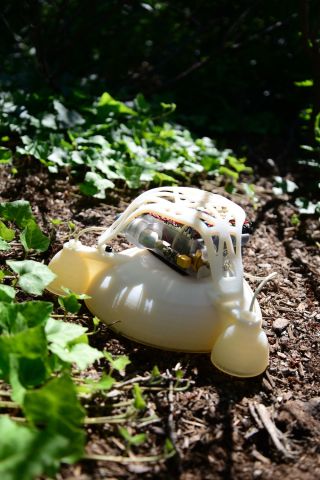 Roboticists created this hybrid robot that has a soft exterior but a hard interior.
(Image: © Wyss Institute for Biologically Inspired Engineering and the Harvard John A. Paulson School of E ngineering and Applied Sciences)

It may seem soft and squishy to the touch, but a new robot is tough on the inside and ready to pounce, researchers say.

The 3D-printed bot has hard insides but a soft exterior, and this blend of materials makes it much better at explosion-powered jumps than droids that are either completely hard or completely soft, according to a new study.

Such leaping robots could one day come in handy in harsh environments too dangerous for humans, particularly because the bots are capable of surviving hard falls and other unforeseen circumstances, scientists added. [The 6 Strangest Robots Ever Created]

"One wild potential application would be in space — on the moon or Mars or other planets," said study co-lead author Nicholas Bartlett, a roboticist at Harvard University. "These are unpredictable environments, and a soft robot that can bend and adapt to such environments and put up with a lot of punishment could be really useful. You could also think of more practical applications, such as search-and-rescue missions in disaster scenarios such as collapsed buildings, where a soft robot could go where no wheeled robot could navigate."

Conventional robots are typically rigid creations. Although they can be fast, precise and strong, this rigidity makes them vulnerable to harm from bumps, scrapes, twists and falls, and also prevents them from being able to wriggle past obstacles.

Increasingly, researchers are developing robots made from soft, elastic plastic and rubber, inspired by worms and starfish. These soft robots are resistant to many kinds of damage, and are able to overcome obstacles that can impede hard robots. But, their floppy nature can make them slow, weak and clumsy. Moreover, they often are not completely soft, since they require such hard components as motors, pumps, batteries and sensors, which also tend to be fragile.

Now, scientists have created a robot made up of both hard and soft parts that combines the best of both types. The idea of blending soft and hard materials in a robot's body came from nature, Bartlett said.

"The octopus has an almost entirely soft body, but a rigid beak, and when you look at the interface between the body and the beak, it's not an abrupt transition, but a gradual shift between hard and soft," Bartlett told Live Science. "Evolution has had a head start on us for many millions of years — why not take tried-and-tested designs and use them for inspiration with our machines?"

The researchers created the new robot using 3D printing, which creates items by layering materials such as rubber and plastic, just as ordinary printers lay down ink. However, 3D printers can lay flat layers on top of each other to build 3D objects. The droid weighed about 2.1 lbs. (965 grams). [The 10 Weirdest Things Created By 3D Printing]

Soft robots typically move their limbs by using air compressors that force bursts of air in and out of a series of pneumatic channels running through their appendages. Recently, the researchers pioneered a way to use explosive force to propel rubbery bots more quickly.

The robot consists of a soft, three-legged body that absorbs impacts and a core that houses key components such as a battery, oxygen cartridge, butane cell, air compressor and a combustion chamber. The robot's core is made of two nested hemispheres — the bottom hemisphere is essentially a soft belly, while the top hemisphere is made of nine different layers of material, ranging from highly flexible to fully rigid, with the hardest layer a thousand times stiffer than the softest one.

The combustion-powered robot has three pneumatic legs and a belly that can flex. To move, the robot first inflates its pneumatic legs to tilt its body in the direction it wants to go. It then ignites a mix of oxygen and butane inside its combustion chamber, forcing its belly to flex outward, which catapults the robot into the air. This autonomous, untethered bot is capable of completing more than 30 consecutive jumps.

The robot is a powerful jumper. In tests, it reached a height of 2.5 feet (0.75 meters) in vertical leaps, which is about six times its body height. For lateral jumps, the robot moved 0.5 feet (0.15 m), which is roughly half its body width, the researchers said.

Although this hybrid robot could only jump about a quarter of the height that a rigid counterpart could, it was much better at withstanding the impact of landings, the researchers said. In one test, the body of the rigid robot shattered upon landing, surviving a total of just five jumps; in contrast, a hybrid robot that was dropped from the maximum height the rigid robot reached was able to survive 35 falls, they added.

The researchers also suggest the hybrid robot is significantly better at surviving landings than a soft robot. They calculated that the bodies of the all-soft robots absorbed less than three-quarters of the shock of impact that the hybrid robots did.

"We believe that bringing together soft and rigid materials will help create a new generation of fast, agile robots that are more robust and adaptable than their predecessors and can safely work side by side with humans," study co-lead author Michael Tolley, a roboticist at the University of California, San Diego, said in a statement.

The scientists detailed their findings in the July 10 issue of the journal Science.