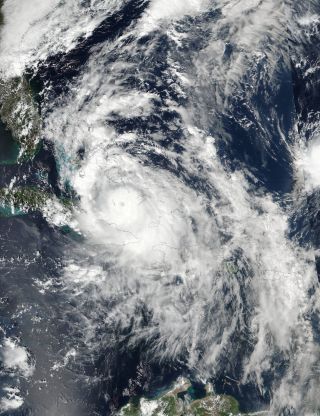 Hurricane Matthew is expected to gain strength in the coming days as it blasts the coasts of Florida, Georgia and the Carolinas with extreme winds, rain and flooding. After hitting the Carolinas, though, experts now predict the monster will head out to sea, sparing the mid-Atlantic and New England states.

Why a turn to sea?

The answer has to do with a low-pressure system within the United States, said James Done, the science lead for the Capacity Center for Climate and Weather Extremes at the National Center for Atmospheric Research in Boulder, Colorado. [See Photos of Hurricane Matthew]

"We were expecting [Matthew] to track all of the way up the Northeast coast to New England," Done told Live Science. "It would have been pulled by the environmental [low-pressure] flow within which it sits. However, that flow has not been strong enough to pick up the hurricane and drag it northward."

Because that flow is too weak to "pick up" the hurricane, experts now predict that Matthew will go out to sea late Saturday night (Oct. 9), moving south again toward Florida, and then flounder off the east coast of Florida, Done said.

Until then, however, Hurricane Matthew is expected to remain a powerful force. It currently has winds near 140 mph (220 km/h), and its hurricane-force winds extend outward up to 60 miles (95 kilometers) from its center, according to an update posted by the National Hurricane Center (NHC) at 2 p.m. ET today (Oct. 6).

But today, the warm, calm and moist conditions of the Bahamas recharged the hurricane, allowing it to regain Category 4 status, Done said.

The hurricane is expected to move very close to Florida's east coast tonight through tomorrow night, the NHC said. However, it's unclear whether Matthew will follow the coastline northward, or whether it will make landfall when it hits the Sunshine State, Done said. [A History of Destruction: 8 Great Hurricanes]

Hurricane Matthew is expected to maintain its Category 4 status as moves north up the Georgia coast, but it may lose strength and be downgraded to a Category 2 as it reaches South Carolina this Saturday (Oct. 8), he said. North Carolina will likely experience tropical-storm-force winds and heavy rain, but will probably be spared the brunt of the storm if Matthew turns eastward toward the Atlantic, Done said.

Once it's out at sea, the hurricane will likely weaken. That's because strong winds high up in the atmosphere will drive dry air into the system and rip the hurricane apart, he said.

Hurricane experts had wondered whether Matthew would interact with Hurricane Nicole. But it turns out that Nicole is too far east and far too weak to have any noticeable influence on Matthew, Done said.

He added that although Matthew packed formidable winds, a storm's torrential rain and storm surges are what usually kill people. Storm surges occur when the low pressure at the center of the hurricane causes ocean levels there to bulge. Moreover, hurricane winds push the water, causing it to build up on itself, he said. [5 Hurricane Categories: Historical Examples]

When added together, these forces can lead to coastal flooding, as "the water piles up in these regions and eventually spills out over the land," Done said.

The NHC emphasized this risk in a statement today..

"The combination of a dangerous storm surge and the tide will cause normally dry areas near the coast to be flooded by rising waters moving inland from the shoreline," the center said. "There is a danger of life- threatening inundation during the next 36 hours along the Florida east coast, the Georgia coast and the South Carolina coast, from Deerfield Beach, Florida, to Edisto Beach, South Carolina."

In a tweet, NASA astronaut Mark Kelly showed a video of the hurricane, saying, " #HurricaneMatthew as seen from the @space_station. Stay safe, Florida."