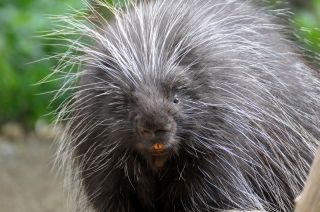 The North American porcupine (Erethizon dorsatum) is the second-largest rodent in North America, beat out only by the beaver, according to the University of Michigan, Museum of Zoology.
(Image: © A_Lein, Shutterstock.com)

All porcupines have a few traits in common. The most obvious trait is the long, sharp quills that cover their bodies. Some quills can get up to a foot (30 centimeters) long, like those on the Africa's crested porcupine, according to National Geographic.

Porcupines use the quills as a defense. They make shake them, which makes them rattle, as a warning to potential predators. If that doesn't work, they may charge backwards into the predator. The quills are loosely attached but cannot be thrown or projected, according to the Animal Diversity Web. Some quills have scales or barbs that make them very hard to remove. Once a quill is lost, it isn't lost forever. They grow back over time. A North American porcupine can have 30,000 or more quills, according to National Geographic.

In general, porcupines live in just about any terrain, including deserts, grasslands, mountains, rainforests and forests. Dens in tree branches or tangles of roots, rock crevices, brush or logs are the porcupine's home.

Porcupines aren't really social. Both types of porcupines are typically solitary, though New World porcupines may pair up. A mother and her young is considered a family group called a prickle.

Porcupines are herbivores. This means they eat mostly vegetation. Some porcupines love wood and eat a lot of bark and stems. They also eat nuts, tubers, seeds, grass, leaves, fruit and buds.

Though they don't eat meat, porcupines chew on bones to sharpen their teeth. Bones also give them important minerals, like salt and calcium, to keep them healthy. Porcupines are also known to eat bugs and small lizards every now and then.

Female porcupines carry their young for a gestation period of 16 to 31 weeks, depending on species, and give birth to one to three babies at a time. Baby porcupines are called porcupettes.

Porcupettes are about 3 percent of mother's weight at birth, according to the San Diego Zoo. At birth, they have soft quills, which harden in a few days. Porcupettes mature at 9 months to 2.5 years, depending on species and can live up to 15 years in the wild.

This is the classification of the North American porcupine, according to Integrated Taxonomic Information System (ITIS):

Porcupines are listed as least concern or as vulnerable by the International Union for Conservation of Nature (IUCN), depending on the species. Species listed as vulnerable include the Phillipine porcupine and the bristle-spined porcupine. There are currently no species listed as endangered, though some species don't have enough data to come to decision on its status.