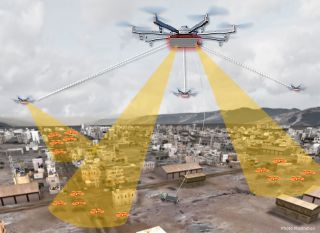 An artist's concept of the Aerial Dragnet program, which will monitor urban drone traffic.
(Image: © DARPA)

In recent years, small unmanned aerial vehicles (UAVs), such as commercial quadcopters and hobby drones, have become less expensive and easier to fly — adding traffic to airspace that's already congested. Drones are also more adaptable for terrorist or military purposes, and because they are currently flying unmonitored, U.S. forces want to be able to quickly detect and identify UAVs, especially in urban areas.

"Commercial websites currently exist that display in real time the tracks of relatively high and fast aircraft — from small general aviation planes to large airliners — all overlaid on geographical maps as they fly around the country and the world," DARPA program manager Jeff Krolik said in a statement. "We want a similar capability for identifying and tracking slower, low-flying unmanned aerial systems, particularly in urban environments."

Aerial Dragnet will initially focus on protecting military troops who are operating in urban settings overseas. However, DARPA said that the system could be applied stateside to help protect civilians in U.S. metropolitan areas from drone terrorist threats.

While there are UAV tracking systems in development, these surveillance methods are focused on open areas. Urban areas present a particular challenge for monitoring small drones and other UAVs, because sight lines are very limited, according to DARPA officials.

DARPA therefore envisions "a network of surveillance nodes" for Aerial Dragnet that uses sensor technologies that can look over and between buildings, tracking drones and UAVs even when the robotic flyers disappear from sight. This network could be mounted on long-endurance UAVs, resulting in a super drone network to monitor other drones — as an artist's concept shows.

The agency is hosting a Proposers Day on Sept. 26 for new technologies for the Aerial Dragnet program.