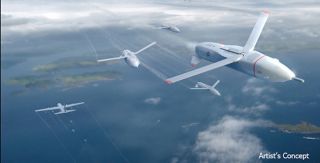 When the U.S. military needs a new idea for drone technology, it turns to an unlikely source for inspiration: old fairy tales.

The Defense Advanced Research Projects Agency (DARPA), which is responsible for developing new technologies for the military, recently announced its "gremlin" program, a drone design initiative. It aims to get swarms of small, autonomous robots high in the air where they can discreetly keep tabs on the enemy. The program is named for the "imaginary, mischievous imps that became the good luck charms of many British pilots during World War II," DARPA said.

Like their make-believe counterparts, DARPA's mechanical gremlins will reside inside of manned aircraft. Pilots will launch the drones as needed for intelligence, surveillance and reconnaissance-type missions, DARPA officials said. [7 Technologies That Transformed Warfare]

Small drones that can be launched by soldiers on the ground already exist, but DARPA's gremlins would be the first U.S. military drones to take off from and return to a piloted aircraft in flight. The agency announced last December that it is modifying planes typically used for other purposes, such as transporting troops, to serve as what DARPA Program Manager Dan Patt described as "aircraft carriers in the sky" for the swarming drones.

Repurposing existing aircraft for the gremlins' home base is part of an effort to keep the cost of the new program low, DARPA officials said. The agency also said it expects the drones to be made inexpensively, calling for designs with "low-cost, limited-life airframes." In other words, the drones need to be cheap, but not so cheap that they fall apart after one use.

"We wouldn't be discarding the entire airframe, engine, avionics and payload with every mission, as is done with missiles, but we also wouldn't have to carry the maintainability and operational-cost burdens of today's reusable systems, which are meant to stay in service for decades," Patt said in a statement.

In addition to being low cost and small enough to fit inside another plane, the gremlins need to be smart enough to keep their wits about them in the air without help from a pilot. This means they need to have high-tech tools on board, such as advanced flight-control and navigation systems.

The gremlin program, as well as the modification of manned gremlin "aircraft carriers," is part of a DARPA RFI, or request for information. A term borrowed from business jargon, RFIs are used across industries to gather a broad range of ideas about a specific product or process. Once all the ideas are submitted, the people in charge can pick and choose the ones they like best and apply them to the situation at hand.

In this case, DARPA will choose which drone design works best for the agency's gremlins. The department will also have to figure out the most cost-effective way to transform a transport plane into a gremlin clubhouse. And DARPA officials will have to find the best technology to get a bunch of little drones to coordinate their actions in the air.