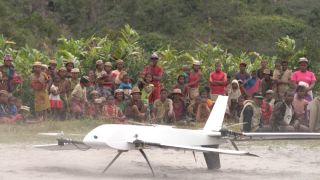 Drones. The mere mention of the word can incite a mix of terror, annoyance and fascination.

But now, doctors at Stony Brook University Medicine have delivered on a promise of using drones for the good of humankind, to offer life-saving health care to villagers in a remote rural region in Madagascar.

The concept is simple: Use a drone to fly to villages that aren't easily accessible by roads, in order to deliver medicine or pick up biological samples for analysis at a central medical center. For remote villages in Madagascar's Ifanadiana district, where there are no roads, drones can fly to and from a central region in about an hour, compared to a trip lasting upward of 10 hours each way by foot.

In July, public health professionals — led by Dr. Peter Small, a professor of global health at Stony Brook — partnered with a startup drone company called Vayu Inc. to conduct what they claim is the first autonomous, long-distance flight of a drone to land and retrieve biomedical samples — in this case, blood samples collected by a health care worker in the field. The drone flew from the central research facility and landed in the village. The health worker loaded it with real blood samples, and then the drone flew back to the facility. This was a test with real samples, and although this trip was just a one-stop round trip, with enough battery life, the drone could go location to location.

Although the concept is straightforward, the devil has been in the details, Small told Live Science. First, he needed to obtain permission from three different Madagascan ministries, each with unique concerns about unmanned vehicles flying through their skies. [Photos from Madagascar: A Drone Carries Blood Samples from a Remote Village]

His group also needed a drone that was capable of carrying large loads over long distances — specifications that Vayu could meet. The drone that the company selected for this task is about the size of a picnic table, and has fixed wings. It can land and take off vertically, and fly autonomously as far as 40 miles (64 kilometers).

But it was equally important to gain the trust of, and educate, the villagers about drones. Many of these villagers live as their ancestors have for hundreds of years and would be startled by flying vehicles. For this task, Small relied on his colleagues at Stony Brook's ValBio research station, on the edge of Ranomafana National Park in Madagascar, who regularly dispatch health workers (by foot) to these remote villages. [5 Amazing Technologies That Are Revolutionizing Biotech]

The promise of drone-facilitated health care has been years in the making. Some university-based researchers have used drones to deliver medicine and other supplies, often using parachutes to drop packages from the drone to the ground because of the difficulty of landing and relaunching a drone from a great distance. In June, researchers at the Johns Hopkins Bloomberg School of Public Health published an article in the journal Vaccine describing the details of how a vaccine delivery and disease surveillance system via drones in rural Africa and Southeast Asia could be set up someday.

"It's easy to say one could or will fly, but we actually did," Small said. The next steps in the researchers' plan are to use the drones for surveillance, he said. For example, a community health worker who notices an unusual disease beginning to emerge could call in drones to deliver help.

These are definitely not the kinds of drones you want trained raptors to take down.