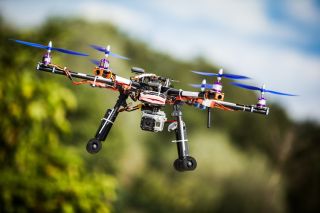 NEW YORK — Military combat has become one of the more notorious uses for drones, but these robotic flyers can be valuable off the battlefield, too. In fact, drones could  be used for a variety of humanitarian purposes, experts say.

Here are four ways drones can be used for good:

Drones equipped with infrared sensors are particularly useful for search and rescue missions. These autonomous aircraft can fly overhead and detect the heat given off by a missing person. [5 Surprising Ways Drones Could Be Used in the Future]

"It's like 'Predator' vision," Senese said, referencing the heat-seeking ability of the creature in the science fiction film "Predator."

Last year, a drone located a man who had been in a car crash in Canada, Senese said. Emergency officials said that without the drone, they would not have been able to find the man until the next morning, and by then he likely would have died because of the freezing temperatures. The  In this case, the drone tracked the man's cellphone signal to locate him.

A Texas-based company called EquuSearch is already using infrared-equipped drones in search parties. The company has approval from the Federal Aviation Administration to use the drones, but, in general, there are still many laws that need to be worked out for the regulation of commercial drones, Senese said.

Scientists and conservationists are beginning to use drones to observe and monitor wildlife, Senese said. Drones are particularly useful in monitoring and studying remote areas, such as Alaskan forests, or largely inaccessible areas like deserts.

Scientists can use drones to collect several aerial images of these areas, and then use software to stich the various images together, creating detailed maps of hard-to-reach areas. The maps are possible because scientists can program drones to follow a specific flight pattern, Senese said.

"You can draw any kind of shape or pattern, and the drones will fly it," Senese said.

Sometimes it's impossible for people to reach an area that is flooded or burned until several days after the disaster.

Scientists are now using drones to study areas like the Chernobyl exclusion zone – an area with dangerous radioactive contamination from fallout after the nuclear power meltdown in 1986 – to learn more about radiation effects without having to visit the sites themselves.

Typhoon Haiyan, which ravaged the Philippines last year, also provided a use for drones, Senese said.

"The footage gathered [in the Philippines] with drones — I don't want to say it's beautiful, because it's terrifying, but it gave us a look at the damage that would not have been possible without drones," Senese said.

Drones also have potential artistic uses. The machines could make entirely new perspectives and angles possible in cinematography, Senese said. More and more drones can be outfitted with 3D-scanning cameras that allow them to perform increasingly complicated maneuvers.

"The cameras are like vision for drones," Senese said.

With these cameras attached, drones can navigate around obstacles and become even more reliable as autonomous crafts.