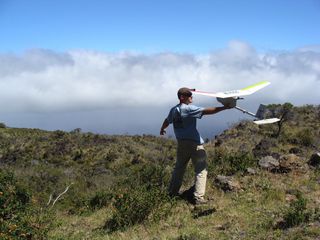 The leading causes of death for wildlife biologists on the job are not grizzly bear maulings or poisonous snakebites. The real cause: small-plane crashes.

That's one reason the U.S. Geological Survey (USGS) is turning toward a technology more associated with military reconnaissance than conservation for its field studies. Former military drones are being repurposed as eyes in the sky to monitor volcanoes, study flood zones and track endangered wildlife — sparing biologists from risky plane rides.

This program got a splash of bad publicity on Tuesday (Dec. 17) when Sen. Tom Coburn (R-Okla.) included the USGS drones as an example of government waste in his 2013 "Wastebook," dismissing the research as "counting sheep" instead of focusing on more-crucial flood gauges. [9 Totally Cool Uses for Drones]

It's true that a number of USGS flood gauges are set to be discontinued due to budget cuts caused by the sequestration — automatic spending cuts put into place by Congress when legislators could not agree on a spending deal. However, the drones conduct crucial research as well, and actually represent a cheaper way to do that research than ever before, said Matthew Larsen, the associate director of Climate & Land Use Change at the USGS.

"If you don't know the full background or scientific rationale behind a particular activity…[it] what might look like wasteful spending," he said. However, that research "is in fact a very frugal and effective way to use funds," Larsen said.

USGS gets its drones from the Department of Defense. When a model is no longer up-to-date for military purposes, it can be retrofitted with cameras and sensors for use in monitoring the landscape.

Before the emergence of drones, wildlife biologists had to get in helicopters or fixed-wing planes to track and count wildlife in remote areas. Not only is this method expensive, it's also dangerous, Larsen told LiveScience. Two-thirds of workplace deaths among wildlife biologists in the last 60 years have resulted from aircraft crashes, he said.

Now, the USGS uses two drones to do the same work, cheaply and safely. One drone, the AeroVironment RQ-11 Raven, weighs about 4 lbs. (1.8 kg) and can carry an additional 10 lbs. (4.5 kg) of sensors and cameras. With its 5-foot-long (1.5 meters) wingspan, the drone looks a bit like a model airplane. To launch it, researchers simply throw it into the air.

The other drone, Honeywell's T-Hawk, is larger. It weighs 18 lbs. (8 kg) on its own and up to 50 lbs. (23 kg) loaded with cameras and sensors. The T-Hawk flies like a mini-helicopter. [How Drones Work (Infographic)]

The drones can get into all sorts of situations that would be dangerous for humans. USGS scientists have died doing important work, such as monitoring volcanoes for eruptions. Most famously, a USGS volcanologist named David Johnson perished in 1980 at an observation post at Mount St. Helens. He was the first to warn that the eruption had occured,  transmitting his final message by radio moments before molten pyroclastic flow from the volcano swept him away.

Camera-mounted drones can keep an eye on volcanoes without putting anyone in harm's way, Larsen said. Drones can also be fitted with sensors that pick up subtle changes in the gases vented over a volcano; these changes can provide advanced warning of an eruption.

And despite Coburn's attempt to pit drones against flood gauges, drones have their role to play in flood zones, too. Flying a drone over a flooded stretch of river can reveal where the water is bursting (or threatening to burst) its banks, or where levees are overtopped, Larsen said.

The wildlife uses of the drones are similarly efficient — and in many cases, they provide the easiest way to fulfill the requirements of the law. The Endangered Species Act demands the protection of threatened and endangered species. The U.S. Fish and Wildlife Service is responsible for listing and delisting protected species, but that agency relies heavily on information from USGS research to make those decisions.

Animals such as the endangered Peninsular bighorn sheep (Ovis Canadensis), which lives in southern California and the Baja Peninsula, roam remote areas. Drones can get into those regions easily, and without spooking wildlife as a large plane or helicopter would, Larsen said.

Drones can also monitor changing habitats. As climate change leads to warmer air temperatures out west, streams heat up, threatening the cold-water habitat of trout and graylings, a popular sport fish, Larson said. Drones can fly over streambeds and measure forest canopy, revealing how much sunlight warms a particular stream and mapping the shrinking fish territory.

The role of the USGS

Without accurate information, mismanagement of a species can cause major problems. One example, Larsen said, is the case of feral horses in western states.

"Herds of these horses end up disturbing pristine habitat and rangeland, and they affect endangered species," he said. "Being able to see them and track them and count them with these UAVs [unmanned aerial vehicles] is another example of a wildlife management tool that's inexpensive and can be very effective."

In an email to LiveScience, a Coburn spokesman said that the senator's report is not meant to judge the value of particular science, but to question federal funding for the research. In the case of the USGS, it's hard to see who else would take on the responsibility.

While state and local management agencies can conduct some research, their jurisdiction ends at their boundaries, Larsen said. And the federal government is responsible for following its own laws.

"The federal government has a responsibility for the Endangered Species Act, so it's hard to imagine that we would say to a private company, 'Go manage this federal mandate,'" he said.

The USGS is "the nation's earth science agency," he added. "We're the only one there is at the federal level. We have a responsibility to assess a variety of conditions, whether hazards, ecosystem health, natural resources, water or forest cover at the regional to national scale ... There's no other entity that provides that unbiased science."