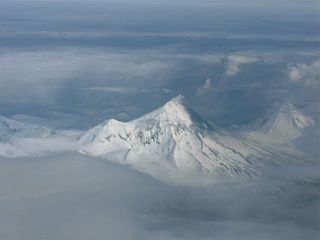 Monitoring volcanoes is a tough gig. You've got to know what's going on — but getting too close is a deadly proposition.

Fortunately, technology has made it easier than ever to keep tabs on magma- and ash-spewing mountains around the globe. Much of this technology allows researchers to keep way back (even watching volcanoes from space) while keeping a close eye on volcanic activity. Some of these technologies can even penetrate cloud-swathed volcano peaks, allowing researchers to "see" ground changes that could signal an imminent eruption or dangerous lava dome collapse.

"You like to have multiple sources of information to maximize your ability to understand what is going on," said Geoff Wadge, the director of the Environmental Systems Science Center at the University of Reading in the United Kingdom. [History's Most Destructive Volcanoes]

Monitoring volcanoes used to be a matter of getting boots on the ground. In-person fieldwork still happens today, of course, but now scientists have far more tools at their disposal to track changes around the clock.

For example, researchers at one time had to troop to volcanic gas vents, pull out a bottle to capture the gas, and then send the sealed bottle to a lab for analysis. That technique was time-consuming and dangerous, considering that a great number of volcanic gases are deadly. Now, scientists much more frequently turn to technology for these dirty jobs. Ultraviolet spectrometers, for example, measure the amount of ultraviolet light from sunlight absorbed by a volcanic plume. This measurement allows researchers to determine the amount of sulfur dioxide in the cloud.

Another tool, in use at the Hawaiian Volcano Observatory since 2004, is the Fourier transform spectrometer, which works similarly but uses infrared light instead of ultraviolet. And one of the observatory's newest tricks combines ultraviolet spectrometry with digital photography, using cameras that can capture several gas measurements per minute in the field. All of this gas information helps researchers figure out how much magma is under the volcano and what that magma is doing.

Other high-tech techniques track volcano-triggered ground movement. The deforming of the ground around a volcano can signal an impending eruption, as can earthquakes. The Hawaiian Volcano Observatory has more than 60 global positioning system (GPS) sensors tracking movement at the state's active volcanic sites. These GPS sensors aren't much different from those in your car's navigation system or in your phone, but they are more sensitive.

Tiltometers, which are exactly what they sound like, measure how the ground tilts in a volcanic area, another telltale sign that something might be stirring below ground.

Having an eye in the sky is handy for tracking volcanic changes, too. Satellite imagery can reveal even minute elevation changes on the ground. One popular technique, called interferometric synthetic aperture radar (or InSAR), involves two or more satellite images taken from the same spot in orbit at different times. Changes in how quickly the satellite's radar signal bounces back into space reveal subtle deformations in the Earth's surface. Using this data, scientists can create maps showing ground changes down to the centimeter.

Satellites only pass over volcanoes every so often, however, limiting views to every 10 days at best, Wadge told LiveScience. To compensate, researchers are now deploying ground-based radar, similar to the radar used to track weather, to keep an eye on volcanic activity. Wadge and his colleagues have developed one tool, called the all-weather volcano topography imagine sensor (ATVIS), that uses waves with frequencies of mere millimeters to penetrate the clouds that often shroud volcanic peaks from view. With ATVIS, the scientists can "watch" the formation of lava domes, or gradually growing swellings, on volcanoes.

"Lava domes are very dangerous, because they pour out this highly viscous lava in a big pile, and eventually it collapses. In doing so, it produces pyroclastic flow," Wadge said.

Pyroclastic flow is a deadly, fast-moving river of hot rock and gas that can kill thousands in minutes. [50 Incredible Volcano Facts]

Wadge and his colleagues are testing ATVIS on the volcanically active West Indies island of Montserrat. Since 1995, the Soufriere Hills volcano on the island has been periodically erupting.

Radar measurements can also track flows of molten lava from space, Wadge said. Although satellite passes may occur only every few days, radar instruments can pinpoint locations down to a few feet (1 to 2 meters). Putting together images taken from space of a slow-moving lava flow can reveal a "movie-style" sequence of how the flow is advancing, Wadge said.

Increasingly, scientists are turning to unmanned drones to swoop close to a volcano while keeping humans out of harm's way. In March 2013, NASA flew 10 remote-controlled unmanned drone missions into the plume of Costa Rica's Turrialba volcano. The 5-pound (2.2 kilograms) drones carried video cameras filming in both visible and infrared light, sulfur dioxide sensors, particle sensors and air-sampling bottles. The goal is to use data from the plume to improve computer predictions of volcanic hazards such as "vog," or toxic volcanic smog.

On occasion, technology can even catch an eruption no one would have noticed otherwise. In May, Alaska's remote Cleveland volcano blew its top. The volcano is on the Aleutian Islands, so remote that there is no seismic network monitoring for explosions. But eruptions can disrupt air travel, so it's crucial that researchers know when an explosion is occurring. To monitor the busy Cleveland volcano, scientists at the Alaska Volcano Observatory use infrasound to detect low-frequency rumblings below the range of human hearing. On May 4, this technique enabled the scientists to detect three blasts from the restless volcano.

In another case of remote volcano detection, in August 2012, a ship in New Zealand's Royal Navy reported a floating island of pumice measuring 300 miles (482 km) long in the South Pacific. The origin of the pumice would likely have remained a mystery, but volcanologist Erik Klemetti of Denison University and NASA visualizer Robert Simmon went sleuthing for the source. The two scientists searched months of satellite photos from NASA's Terra and Aqua satellites and found the first hint of an eruption: ash-gray water and a volcanic plume at an underwater volcano called the Havre Seamount on July 19, 2012.

"If you didn't know where to look, you would have missed it," Klemetti told LiveScience. Satellite imagery, along with other technological advances, has enabled volcanologists to detect more eruptions than ever before, he said.

"Go back 25 years ago, there are plenty of places where we wouldn't have had any clue that an eruption occurred," Klemetti said.