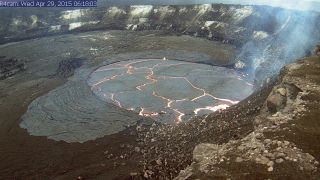 For the first time in more than 30 years, lava is flowing on the floor of Halema'uma'u crater in Hawaii.

Kilauea volcano's volatile lava lake spilled over the rim of a deep vent within Halema'uma'u crater several times overnight, lapping onto the edges of the vent like an overflowing pool. The lava lake sits in a crater within a crater: Halema'uma'u crater is the deep, wide pit at the top of Kilauea volcano. For this reason, the lava flood poses no risk to people or structures, said Matt Patrick, a geologist at the U.S. Geological Survey's Hawaiian Volcano Observatory.

Close monitoring has revealed that the lava lake changes every day, rising and falling by the minute as gas builds up in the lava and then escapes. The lake surface also swells and drops when new magma flows into the volcano's underground reservoir of molten rock, or when magma is tapped during eruptions.

To watch the ongoing eruptions at Kilauea, visit the volcano observatory's live webcams.

Kilauea's lava lake is second only to Nyiragongo volcano's in size, according to the USGS. Mount Nyiragongo is in the Democratic Republic of the Congo. Kilauea's lake is 560 feet by 720 feet (170 m by 220 m).

Until this month, the lava lake had risen as high as 72 feet (22 m) below the crater's rim and had dropped more than 720 feet below the rim at its lowest level. The lava lake, which emerged in February 2010, has never reached the crater's rim before. However, Kilauea volcano has a long history of summit eruptions, the most recent of which was in 1982. The deep vent holding the lava lake formed on March 19, 2008.

Kilauea volcano has erupted continuously since 1983 from its slopes, in an area called the East Rift Zone. The flows have destroyed more than 200 structures and have buried about 9 miles (14.5 kilometers) of highway with as much as 115 feet (35 m) of lava.