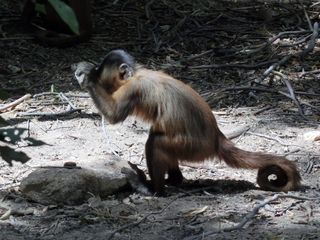 A wild capuchin monkey in Brazil using a "hammer" stone to crack open the shell of a cashew nut placed on a larger "anvil" stone.
(Image: © Oxford University)

A group of wild capuchin monkeys in Brazil have used stones as tools to prepare their favorite meal of cashew nuts for more than 700 years, according to a new study.

The researchers observed young monkeys learning to use stones as tools from older monkeys at recognizable "cashew-processing sites," such as around the base of a cashew tree. After selecting and using heavy "hammer" stones on heavier "anvil" stones to pound open a nut, the monkeys discarded the stones in piles at the processing sites, where other monkeys would later select stones to use. [See photos of the monkeys using stone tools]

The new study, published today (July 11) in the journal Current Biology, is the second report in recent weeks showing evidence of a monkey "Stone Age" from the Primate Archeology Project at Oxford University, led by archaeologist Michael Haslam.

Last month, Haslam and other scientists published research in the Journal of Human Evolution about archeological evidence for tool use by wild macaques in Thailand, which showed they have been using stones to open shellfish and nuts for at least 50 to 100 years.

"Until now, the only archaeological record of pre-modern, nonhuman animal tool use comes from a study of three chimpanzee sites in Cote d'Ivoire in Africa, where tools were dated to between 4,300 and 1,300 years old," Haslam wrote in a statement about the latest research. "Here, we have new evidence that suggests monkeys and other primates … were also using tools for hundreds, possibly thousands of years."

The findings could even shed light on the possible influence of monkeys' tool use on human behavior, he added.

"For example, cashew nuts are native to this area of Brazil, and it is possible that the first humans to arrive here learned about this unknown food through watching the monkeys and their primate cashew-processing industry," Haslam said.

A giant leap for monkeys

Michael Gumert, a primatologist at Nanyang Technological University in Singapore and a co-author with Haslam of the research paper on tool-using macaques in Thailand, told Live Science that the evolution of tool use in primates could have arisen in part from learned traditions and in part from genetic adaptions.

"There is a developmental process, they have to learn this," Gumert told Live Science. "This isnꞌt something that just comes naturally. But for things like human language, for example, we have genetic and biological foundations for language but we require the cultural information as well." [Creative Creatures: 10 Animals That Use Tools]

This makes it hard to separate the two, Gumert said, "and culture and biology keep acting on each other, and once an animal forms a culture, the culture will affect the biology. And we have no idea how that works in these guys yet," he said.

Gumert has studied tool-using macaques on islands in Thailand's Laem Son National Park for around nine years. They were discovered in 2005 by Suchinda Malaivijitnond, a biologist at Chulalongkorn University in Bangkok and co-author of the Thailand research, during a biodiversity survey of the region in the aftermath of the Indian Ocean tsunami late in 2004.

For the latest study, the researchers used boats to observe Burmese long-tailed macaques using stones to hammer open shells and nuts on a beach on Piak Nam Yai Island, near the border with Myanmar.

After the macaques finished their seaside picnic, the researchers excavated part of the beach and discovered stone tools that, through carbon dating and other tests, scientists determined were used by macaques between 50 and 100 years ago.

But Gumert thinks that tool use by macaques in the region is likely to go back many thousands of years, and future research could help build a timeline for the tool-using behavior.

For both the Thailand and Brazil studies, the researchers observed monkeys using stones to open nuts and other foods, and identified characteristic signs of use on stones that the monkeys had used and then set aside. [Gallery: Monkey Mug Shots]

In Brazil, excavations to a depth of about 2.3 feet (0.7 meters) underground at a food-processing site near cashew trees found 69 stones that had been used as tools by previous generations of capuchin monkeys.

They were identified by the shape and size of typical "hammer" and "anvil" stones, the distinctive patterns of damage caused by capuchin pounding, and dark residues on the stones that were shown in mass spectrometry experiments to be caused specifically by cashew nuts.

Carbon dating on small pieces of charcoal discovered near the stones established the oldest were at least 600 to 700 years old, or about 100 generations of capuchin monkeys, the researchers said.

They also found that the stones selected as tools by the monkeys were unchanged in size or shape over that time, which suggests that capuchin monkeys are "conservative" about tool technology and prefer not to change the tools they use — unlike humans living in the same region, according to the scientists.

Uncovering the history of primate tool behavior was a first step in a wider project to compare primate tool use with early human tool use, Haslam said in a statement.

"We find that primates with much smaller brains than humans have innovative ways of exploiting the food sources available to them," he said. "What we don't have at the moment is a body of archaeological evidence to compare the evolutionary behavior of other primates with our own. As we build up a fuller picture of their evolutionary history, we will start to identify the similarities and differences in human behavior and that of other primates."