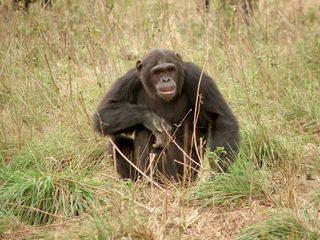 A chimpanzees at Tchimpounga Chimpanzee Sanctuary in the Republic of Congo, operated by the Jane Goodall Institute.
(Image: © Alexandra Rosati )

You may not want to hand them an apron and spatula just yet, but chimpanzees have many of the smarts to cook food, researchers found in a series of experiments with sweet potatoes and carrots.

Finding that humans' closest living relatives possess many of the critical cognitive capabilities to prepare cooked food could help resolve the question of when humans began cooking, the researchers said.

Previous research has shown that chimps and other animals prefer cooked food to raw food. But scientists didn't know if, given the right tools, the primates could and would put them to use. To investigate, evolutionary biologist Alexandra Rosati and psychologist Felix Warneken, both of Harvard University, ran a series of nine experiments, each building on the last, with semi-free-ranging chimps in a sanctuary in the Republic of the Congo. [8 Humanlike Behaviors of Chimps and Other Primates]

Together, the results showed that chimps "understand the transformation from raw into cooked food that occurs during the cooking process," Rosati and Warneken told Live Science in an email. "They exhibit high levels of self-control to acquire and produce cooked food, and can even save food to cook it at a future opportunity."

Next, they tested the crucial question of whether chimps would cook their own food. The chimps were more willing to put food in a cooking device (a bowl-like contraption that emulated cooking) than a noncooking device, and this preference grew with experience.

This problem is challenging for chimps, both in terms of understanding what the devices do, as well as due to their impulse to eat food immediately. "Primates have difficulty giving up food in their hand and show limitations in their self-control when faced with food," Rosati and Warneken wrote in their paper describing the study Tuesday (June 2) in the journal Proceedings of the Royal Society B.

Despite these challenges, the chimps chose to cook the food. [Watch Chimps Trying to 'Cook' Food (Video)]

Moreover, the chimps put the raw food in the cooking device more often than the cooked food and nonedible wood chips, demonstrating they understood the device transformed raw food into cooked food. And although they found this more challenging than other experiments, the chimps were willing to transport food to cook it, in seeming opposition to their natural on-the-go eating style. Finally, some of the chimps even saved food to cook it later.

In his book, "Catching Fire: How Cooking Made Us Human" (Basic Books, 2009),Harvard biological anthropologist Richard Wrangham argued that cooked food offers more energy than raw food, making it a preference for an evolutionary advantage. The taste of cooked food and its softer texture might make it more appealing to chimps. In fact, wild chimps have been observed actively seeking out roasted seeds in burned areas.

Why, then, don't our wild cousins cook? One necessary skill that chimps don't possess is the ability to control fire. In their paper, the researches posited that primates might be less motivated to experiment with fire than early humans were, because unlike humans, chimps rarely consume tubers and roots in the wild; their primary natural food sources, like fruit, don't benefit as much from cooking in terms of taste and texture.

Chimpanzees' social environment might also hold them back. Chimps are competitive in situations involving food, and a high risk of theft might discourage them from trying to save raw food to cook it later. "Cooking is thus a risky strategy, because you might end up with nothing," Rosati and Warneken said in the email. "Perhaps early humans had to become more socially tolerant and trusting of others before they could engage in the arduous and risky process of cooking their food without the risk of theft."

In the future, the duo would like to test the limits of chimpanzees' skills. "One interesting question is whether we could directly test the role of social tolerance to see whether chimpanzees are willing to place their raw food in the cooking device when by themselves, but not when other chimpanzees are around who could potentially steal their food," Rosati and Warneken said.

As fascinating as the study is for the field of chimp cognition, the findings may also be relevant to human development. The researchers said their study contributes to a long-standing debate about when humans began to cook food.

Some scholars argue that fire provided light, warmth and protection long before humans realized they could use it to manipulate food to be more palatable. Others hold that cooking emerged right on the heels of humans' ability to control fire and played an important role in the development of humans' large brains.

The finding that humans and chimps share many of the cognitive capabilities needed for cooking might mean humans' and chimps' last common ancestor had them, too. "Our studies suggest that as soon as fire was controlled, it probably could have been used for cooking food, since all the other cognitive pieces were likely in place: patience, inhibitory control and planning for the future," Rosati and Warneken said.