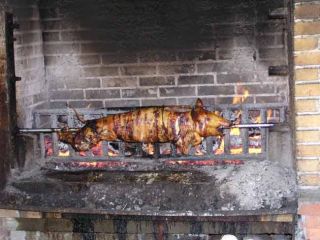 Learning how to cook food stimulated a big leap in human cognition some 150,000 years ago, a new study suggests. Cooking breaks down fibers and makes nutrients more readily available, so our digestive systems then required less energy than those of creatures eating all raw foods. This freed calories up to feed our brains, the thinking goes. Image
(Image: © Dreamstime)

After two tremendous growth spurts — one in size, followed by an even more important one in cognitive ability — the human brain is now a lot like a teenage boy.

It consumes huge amounts of calories, is rather temperamental and, when harnessed just right, exhibits incredible prowess. The brain's roaring metabolism, possibly stimulated by early man's invention of cooking, may be the main factor behind our most critical cognitive leap, new research suggests.

About 2 million years ago, the human brain rapidly increased its mass until it was double the size of other primate brains.

"This happened because we started to eat better food, like eating more meat," said researcher Philipp Khaitovich of the Partner Institute for Computational Biology in Shanghai.

But the increase in size, Khaitovich continued, "did not make humans as smart as they are today."

For a long time, we were pretty dumb. Humans did little but make "the same very boring stone tools for almost 2 million years," he said. Then, only about 150,000 years ago, a different type of spurt happened — our big brains suddenly got smart. We started innovating. We tried different materials, such as bone, and invented many new tools, including needles for beadwork. Responding to, presumably, our first abstract thoughts, we started creating art and maybe even religion.

To understand what caused the cognitive spurt, Khaitovich and colleagues examined chemical brain processes known to have changed in the past 200,000 years. Comparing apes and humans, they found the most robust differences were for processes involved in energy metabolism.

The finding suggests that increased access to calories spurred our cognitive advances, said Khaitovich, carefully adding that definitive claims of causation are premature.

The research is detailed in the August 2008 issue of Genome Biology.

The extra calories may not have come from more food, but rather from the emergence of pre-historic "Iron Chefs;" the first hearths also arose about 200,000 years ago.

In most animals, the gut needs a lot of energy to grind out nourishment from food sources. But cooking, by breaking down fibers and making nutrients more readily available, is a way of processing food outside the body. Eating (mostly) cooked meals would have lessened the energy needs of our digestion systems, Khaitovich explained, thereby freeing up calories for our brains.

Instead of growing even larger (which would have made birth even more problematic), the human brain most likely used the additional calories to grease the wheels of its internal functioning.

Today, humans have relatively small digestive systems and burn 20-25 percent of their calories running their brains. For comparison, other vertebrate brains use as little as 2 percent of the animal's caloric intake.

Does this mean renewing our subscriptions to Bon Appetit will make our brains more efficient? No, but we probably should avoid diving into the raw food movement. Devoted followers end up, said Khaitovich, "with very severe health problems."

Scientists wonder if our cognitive spurt happened too fast. Some of our most common mental health problems, ranging from depression and bipolar disorder to autism and schizophrenia, may be by-products of the metabolic changes that happened in an evolutionary "blink of an eye," Khaitovich said.

While other theories for the brain's cognitive spurt have not been ruled out (one involves the introduction of fish to the human diet), the finding sheds light on what made us, as Khaitovich put it, "so strange compared to other animals."