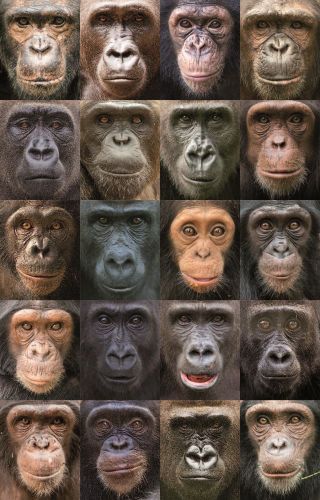 The most comprehensive catalog of great-ape genome diversity to date offers insight into primate evolution, revealing chimpanzees have a much more complex genetic history than humans.

In a new study, researchers sequenced a total of 79 great apes, including chimpanzees, bonobos, eastern and western gorillas, orangutans and humans, as well as seven ape subspecies. The animals were wild- and captive-born individuals from populations in Africa and Southeast Asia.

As part of the study, Marques-Bonet and his colleagues were looking for genetic markers corresponding to changes in a single letter in the genetic code that define a subspecies. The researchers identified millions of such markers, which are important for conservation efforts. For instance, these markers allow people who manage wild-ape populations to identify different kinds of ape. Most of these animals are captured from illegal trade, so scientists don't know how they're related, Marques-Bonet told LiveScience.

Despite the genetic similarity between humans and chimpanzees, the two species are clearly quite different. Some scientists had hypothesized that the differences stem from the "lost" parts of human genomes compared with chimp genomes. But the new study disproved that theory by showing that the lost parts were mostly nonfunctional.

So if it's not genetics, what makes humans different from their great-ape cousins? "If I knew, I would have the Nobel Prize," Marques-Bonet said.

"Having these genomes is like having a book," he added. "So far, we are only just reading the book. It's not the same as understanding it."

The findings are detailed online today (July 3) in the journal Nature.