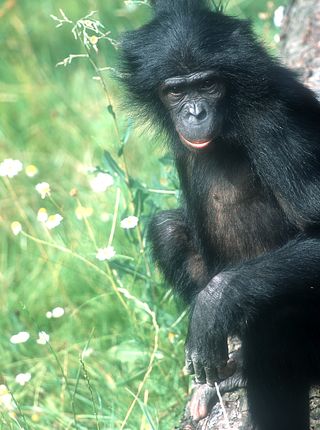 Ulindi, a female bonobo at the Leipzig Zoo in Germany, has had her genome sequenced, researchers report today (June 13), making bonobos the last of the great apes to have their genomes mapped. The resulting genetic code may help unlock the secrets that separate humans — physically, intellectually and behaviorally — from our closest primate relatives.

Bonobos are often seen as the chimpanzee's peaceful cousin. The two primates look very similar and are very closely related, but for some reason chimps resolve conflicts with war while bonobos prefer sex to resolve arguments. Previous studies have also shown that bonobos are more generous with food than chimps are.

"Bonobos and chimpanzees are very different in their behaviors," study researcher Kay Pruefer, of the Max Planck Institute for Evolutionary Anthropology, in Germany, told LiveScience. "While we are not yet able to look at the genome and know why that is, it's important to know the differences between bonobos and chimpanzees to tease apart what genes might be responsible for that."

What stood out for the researchers were the genetic similarities found between humans and both chimps and bonobos. [Animal Code: Our Favorite Genomes]

However, a stretch of DNA that covers about 1.5 percent of Ulindi's genome matches more closely with the genome of humans than to their closer genetic relative the chimps. The chimps, on the other hand, have a different section of the genome that's more similar to humans than to bonobos.

The sequenced genomes will help researchers figure out how the primates become such distinct species. For instance, scientists have hypothesized that the formation of the Congo River separated the ancestors of chimpanzees and bonobos, leading to their separate species. The genome results support this idea in that there was no sign of any interbreeding.

The new genome map suggests that about 4.5 million years ago the common ancestor of all three primates (humans, chimps and bonobos) split off from the rest, and developed into humans.

Then about 2 million years ago, the remaining individuals were divided by the Congo River, and started evolving separately. They became separate species — chimpanzees and bonobos — about 1 million years ago.

"In this short time of a million years they developed these vastly different behaviors," Pruefer said. "Which is intriguing because it means these behavioral patterns can change quite rapidly."

The researchers haven't gotten a chance to look closely at the genes and genetic changes that separate these three hominids, but they are hopeful that careful analysis of these regions may help them understand why chimpanzees and bonobos are so similar, yet so different.

The study was published today, June 13, in the journal Nature.