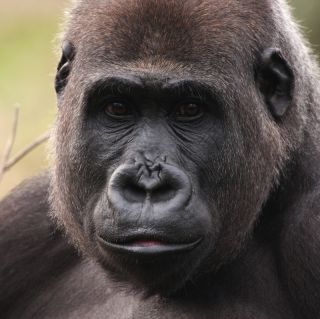 Adding to the already-sequenced genomes of humans, chimpanzees and orangutans, researchers have completed the set of the great apes by sequencing the genes of a western lowland gorilla.

"The gorilla genome is particularly important for our understanding of human evolution, because it tells us about this crucial time when we were diverging from our closest living relatives, the chimpanzees," study researcher Aylwyn Scally of the Wellcome Trust Sanger Institute said in a press conference about the findings on Tuesday (March 6).

The results show that humans are closer to gorillas than we'd realized. The human-chimp part of the great ape lineage split off from the gorilla line about 10 million years ago, study leader Richard Durbin, also of the Wellcome Trust Sanger Institute, told reporters. Humans and chimps then diverged from each other about 6 million years ago. Evolutionarily speaking, that's fast.

"The interesting consequence of that is actually that the pattern of ancestry across the three genomes changes from position to position [in the genome]," Scally said. "So although most of the human genome is indeed closest to the chimpanzee genome on average, a sizeable minority, 15 percent, is in fact closer to the gorilla, and another 15 percent is where gorilla and chimpanzee are closer." [8 Ways Chimps Act Like Humans]

In fact, the new data confirms that humans and gorillas are about 98 percent identical on a genetic level, said Wellcome Trust researcher and study co-author Chris Tyler-Smith.

But the differences are illuminating. For example, the researchers found that certain genes involved in sperm formation have become inactive or have been reduced in the gorilla genome compared with the human genome. That may be because gorillas live in harems with one male to many females, Tyler-Smith said, so there is little competition between different males' sperm.

The researchers also found rapid evolution in a single gorilla gene called EVPL, which contributes to keratin formation on the skin. Keratin is the tough protein found in hair and nails. For gorillas, the activity of this gene may be related to the tough knuckle pads that enable gorillas to walk on their fists.

Another interesting nugget of information in the gorilla genome had to do with a passel of genes related to hearing. Researchers already knew that humans had accelerated activity in these genes, meaning evolution was acting on them and suggesting some adaptive benefit to the resulting genetic changes. Now, researchers can see that this accelerated activity stretches back into the gorilla years, too.

"The implication of that is this is not because of human language ability," Tyler-Smith said. "It must be for some broader role."

Finally, the researchers found certain genes shared by gorillas and humans that cause disease in our species, but not in our ape cousins. One of these variants is linked to dementia in humans, and another to heart disease.

"If we could understand more about why those variants are so harmful in humans but not in gorillas, that would have important useful medical implications," Tyler-Smith said.

The researchers reported their results today (March 7) in the journal Nature.