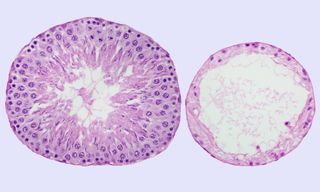 Two 15-minute tickles could be the future of male birth control. New research on rats indicates that currently available ultrasound machinery could be used to kill off sperm-growing cells, technology that could render males infertile.

Male birth control for humans is still far from ready for prime time, though, Tsuruta said. "Further studies are required to determine how long the contraceptive effect lasts and if it is safe to use multiple times." Further work is also needed to figure out what specific settings work best on humans.

The idea was first suggested in 1970 by Mostafa Fahim, a researcher at the University of Missouri-Columbia, who published several studies of ultrasound treatments that killed germ cells and caused infertility, even testing the theory in humans. The machinery Fahim used is no longer available, so the researchers had to start over with commercially available ultrasound equipment and see what would have a similar effect to what was observed historically.

Sperm develops in the testes and goes through multiple intermediate stages. The researchers were aiming to destroy the earliest stages of sperm development, so the treatment, while temporary, would last a few months.

They found that by rotating high-frequency ultrasound around the testes, they could kill most of the sperm-creating cells. The best results were seen after two 15-minutes sessions, two days apart. They tested the rats' sperm two weeks after their treatments.

They found that these two sessions reduced the rat's sperm count to an index of zero, or an extremely low number of motile sperm. They also looked inside and saw that the rats had fewer sperm-making cells.

The study was performed in rats, which are much more fertile than humans. In the rats, the sperm concentration attained — 3,000 motile sperm or fewer per milliliter — would still allow them to reproduce. In humans that low of a sperm count would beconsidered infertile.

"A permanent or reversible method of contraception based on therapeutic ultrasound treatment could encourage more men to share greater responsibility for family planning," the researchers write in the study, published online in the journal Reproductive Biology and Endocrinology on Jan. 29.

The researchers also noted this kind of ultrasonic sterilization may be adapted to induce permanent infertility, providing a noninvasive way to sterilize household pets to control the pet population.