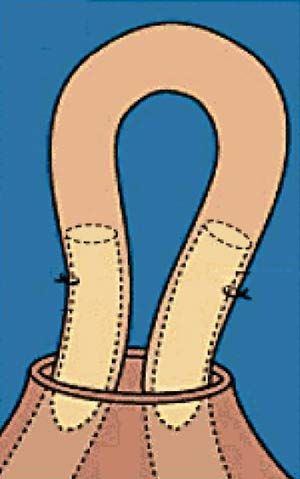 The IVD male contraceptive device works by inserting two soft plugs into each vas deferens. Sperm that gets past one plug is trapped by the other.
(Image: © Â© Shepherd Medical Company)

Men face a future medley of birth control methods as varied as the female lineup  of sponges, pills, and diaphragms.

There's an implant for men that releases the same chemicals found in "the Pill," a gel that kills off the sneaky seeds , and a plug that brings hyperactive sperm  to a standstill.

Other than the less-than-perfect withdrawal technique, men currently have only two contraception choices. Condoms are one often-unpleasant option; the other is undergoing surgery for a vasectomy, which can be irreversible and arguably not all that pleasant either.

Reversibility is an important factor for marketing new male methods of birth control.

"Many men feel that something permanent is scary [and] women feel the same way," said Diana Blithe, program director for the male contraceptive program at the National Institute of Child Health and Human Development. "Having the option of reversible methods allows people to time when they want to have children."

Several new male contraceptives that kill sperm , block sperm production or prevent sperm from leaving the body have recently begun clinical trials and may make their way to doctor offices and into the bedroom within the next few years.

A recent study by researchers at UCLA and the University of Sydney found that men who had taken hormones to stop sperm production could recover full fertility about four months after stopping the hormones.

"Essentially everyone recovered," said endocrinologist Christina Wang of Harbor-UCLA Medical Center. "It's good news and it's what we anticipated."

The findings are published in an April issue of the journal The Lancet.

The latest push by pharmaceutical companies makes hormonal medicines the most likely mode to make it to market first.

Similar to the way the birth control pill for women suppresses ovulation, a male version keeps men from making sperm.

The "pills" being tested for men are actually implants that release a hormone called progestin, which is also found in most female birth control pills.

Sperm are produced in the testis, controlled by several hormones that are secreted by the hypothalamus and pituitary glands in the brain. When you add a dose of progestin, it shuts down the hormones that produce sperm.

Unfortunately, progestin also stops the production of testosterone  the hormone that gives men many of their manly characteristics such as muscle mass and libido. To maintain their maleness, men with the implants also receive shots to boost testosterone levels.

The regimen isn't simple: implants need to be replaced annually, and shots come every three months.

Oral testosterone would be easier to use, Blithe admits, but pills aren't available at this point. Her team is now developing a more convenient contraceptive gel that men would rub on their upper arms and abdomen daily.

"The goal will be to have options like women do," Wang said.

Other reversible techniques work like corks. They block sperm on their way out of the body.

The Intra Vas Device (IVD) obstructs sperm traveling in the tubes called the vas deferens. The sperm stops, but men still produce an ejaculate. The sperm-less secretions are made in the seminal vesicle, which isn't barricaded by the IVD.

Although the device is implanted in a procedure similar to a vasectomy, in this case the vas deferens is kept intact. However, the reversibility of the IVD has yet to be fully tested.

The FDA has given the go-ahead for a 90-patient study this fall to test the effectiveness of the IVD.

Another clinical trial underway in India is testing a removable gel injected into the vas deferns. The gel, called Reversible Inhibition of Sperm Under Guidance (RISUG), partially blocks the tubes and also kills any sperm that manage to get by.

Advocates for male contraception have high hopes for non-hormonal methods such as the RISUG and IVD.

"The Holy Grail of contraception is a long-term, reversible method without any hormonal side effects," said Elaine Lissner, director of the nonprofit Male Contraception Information Project.