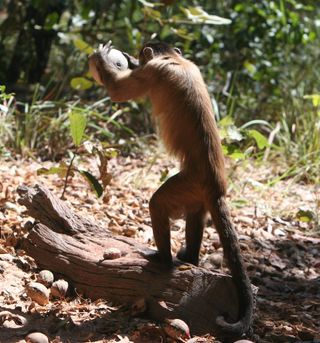 A bearded capuchin monkey uses a rock to crack open a nut placed on a stone "anvil."
(Image: © Barth Wright)

Nut-cracking monkeys don't just use tools. They use tools with skill.

That's the conclusion of a new study that finds similar tool-use strategies between humans and Brazil's bearded capuchin monkeys, which use rocks to smash nuts for snacks. Both monkeys and humans given the nut-smashing task take the time to place the nuts in their most stable position on a stone "anvil," the study found, keeping the tasty morsels from rolling away.

That means the monkeys are able to not only use tools, but to use them with finesse. This ability may be a precursor to humans' ability to adapt tools to different circumstances and to use them smoothly under varying conditions.

"Any one individual can accomodate stones of different sizes, anvils of different angles and material and nuts of different shapes and sizes," said study leader Dorothy Fragaszy, a primate researcher at the University of Georgia, adding, "In fact, some of these nuts people can't crack."

Bearded capuchin monkeys were the first non-ape primates to be discovered using tools in the wild. They crack tough nuts by placing them on pitted stone anvils and then hitting them hard with other large rocks. [8 Humanlike Behaviors of Primates]

"They are slamming [the rock] on that nut," Fragaszy told LiveScience. "It's very impressive when you see it."

Fragaszy and her colleagues wanted to get a better idea of how skilled capuchins are at nut-cracking. In particular, they noticed the monkeys have an odd habit of tapping the nuts multiple times against the stone pits before putting them down. Perhaps, they thought, the tapping was a way to tell how stable the nut might be.

To find out, the researchers brought palm nuts to a population of capuchin monkeys in Fazenda Boa Vista in Brazil. The monkeys are wild, but habituated to human presence. Ten of the monkeys "volunteered" for the study by gathering the nuts and cracking them with stones as big as their heads as the researchers videotaped.

Before handing over the nuts, however, the scientists rolled them along the floor to find their flat sides, which they marked with a line. They also marked the other axis of the nut with color-coded pens so they could identify how the monkeys placed the nuts in the video.

The results revealed that the monkeys consistently placed the nuts in the most stable position. Out of 302 nut-cracking attempts, 253 started with the line marking the nut's stable axis facing up. Monkeys varied only slightly in their ability to ideally place the nut, doing so between 71 percent and 94 percent of the time depending on the individual. [See Video of the Monkey Attempts]

Next, the researchers ran an identical test with humans. Seven male and seven female volunteers were given nuts and told to crack them with stones, just as the capuchin monkeys do. The humans were blindfolded during the task, because the researchers suspected that the monkeys could place the nuts by feel and wanted to find out if humans could, too.

On average, the humans also placed the nuts in the most stable position, doing so on about 71 percent of tries. Unlike capuchins, however, they didn't knock the nuts against the stone very frequently. Instead, humans tended to roll the nuts around in their hands, feeling their shape. Humans have much larger hands than bearded capuchins, the researchers wrote today (Feb. 27) in the journal PLOS ONE, which could explain the different strategies.

The results suggest that humans and monkeys share the ability to use tools skillfully, with minimal effort for maximum effect, the researchers wrote.

"It's skill in the way that we use that word to talk about human skills," Fragaszy said. "It's a goal-directed activity. It's done fluidly. It's done flexibly."