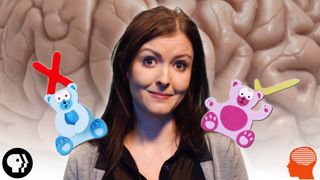 In this series of articles, some of YouTube's most popular science channels take a turn in the spotlight. Their creators employ a range of techniques and styles, weaving together graphics, footage, animation, sound design and a general curiosity about the world around them, exploring and sharings the unexpected and fascinating details of their unique science stories.

Of all the organs in the body, the brain — controller of bodily functions, processor of sensory input and source of the emotions, behaviors and reasoning capabilities that make us human — is perhaps the most fascinating and complex.

It's also the most mysterious. With the brain's approximately 80 billion neurons firing near-instantaneously to relay information and trigger responses, it's no wonder that scientists are still piecing together the picture of how our brains work — and why certain functions sometimes break down.

The intriguing world of the mind takes center stage in the YouTube channel "BrainCraft," created and hosted by Vanessa Hill and produced by PBS Digital Studios. Hill explains neuroscience with animated paper cutouts, using a whimsical and visual approach to describe the chemical underpinnings of brain function, and to investigate how the brain shapes the ways humans view, interpret and react to the world around them.

Her videos look at modern brain science and psychological perspectives on popular culture: from the deadliness of concussions, to why drugs can't be delivered directly into the brain, to the competing strategies that determine the most important mental resources for winning the so-called "Game of Thrones."

Hill honed her science presentation and communication skills while working as an educator for Australia's national science agency, the Commonwealth Scientific and Industrial Research Organisation (CSIRO), she told Live Science. She traveled across the country, visiting classrooms and conducting science demonstrations and workshops, with a focus on chemistry and physics.

But neuroscience and psychology were the science topics that had really captivated her while in school. After moving to the CSIRO media team and experimenting with video and social media, she decided to make videos of her own that addressed brain function and human behavior, looking to animated science shows on YouTube like "Minute Physics" for inspiration.

"I went to conferences and spoke to a lot of people creating videos," Hill said. "When I reached a point where I felt I had enough knowledge about what a YouTube series was, I started BrainCraft."

Hill launched the channel in 2013, crafting and animating paper shapes with stop-motion to tell science stories. After six months, her video "Amazing Effects of Sleep (And Lack of it)" — describing the weird things that happen to people's brains when they're sleep-deprived — was featured on YouTube's front page, and gathered 600,000 views in one day.

Hill told Live Science that while those numbers were certainly encouraging, she felt that her animation proficiency was still evolving; she had a far more sophisticated array of techniques in her toolbox by the time she produced the recent video, "The Tiny Key to Ageing," about the scientist Elizabeth Blackburn, the only Australian woman to win a Nobel Prize.

"BrainCraft" videos challenge viewers to think about how their brains work by asking questions — a tactic that Hill said she learned from her days as a traveling educator.

"People learn better when they question things themselves," Hill explained. "I do really like to ask a lot of questions, play games with people, get them to guess things and think for themselves as much as possible."

So, why should you be watching "BrainCraft?"

"To understand how amazing your minds and bodies are," Hill said.