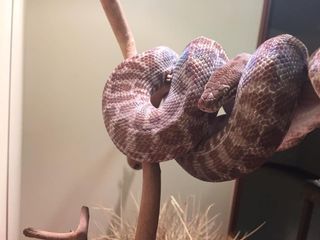 A python likely experienced a weird case of déjà vu last week after it became trapped in a circle of its own molted skin, surprising scientists. The serpent slithered around and around for about 3 hours until it eventually broke free, according to a reptile center in Australia.

The bizarre incident happened at the Alice Springs Reptile Centre on June 14. Visitors noticed that the Stimson's python had molted, and was essentially trapped in its own skin, according to a Facebook post by the center.

"It actually looks like a steering wheel," the center said in a Facebook post. "[I] have been in the reptile business a long time and have never seen anything quite like it." [7 Shocking Snake Stories]

Stimson's pythons molt all the time, about once a month on average, but it's rare for one to get stuck in its sloughed-off skin, said David Penning, a doctoral fellow of biology at the University of Louisiana at Lafayette, who is not affiliated with the reptile center.

"It's just pure, random chance that it would crawl inside its own face, if you think about it," Penning told Live Science. "I've worked with thousands of snakes before, and I've seen a snake accidentally try to eat its own tail, but I've never seen a snake that's trapped inside its own skin casing before."

While humans shed skin in tiny flakes as they scrub and exfoliate, snakes get rid of their skin "in one giant shed," Penning said.

"A young snake that's growing will shed more often than an older snake, because they're literally running out of space inside their skin," he said. Snakes also usually shed if they get a wound or a scratch, and need a new piece of injury-free skin, he said.

Before a snake molts, the old skin is wet and pliable, and "a little bit more stretchy than it normally is," Penning said. "But after a couple of minutes to an hour, it becomes like frail tissue paper because it dries up and it's really thin."

Luckily for the snake in Australia, it eventually escaped the seemingly endless loop by breaking through a hole in the side of the fragile skin, the center said. Although the snake left a hole, the molted skin remained in an intact circle, and an employee at the center took a photo to show Facebook followers, writing, "This one shows the Stimmie most of the way out. The shed skin has remained intact with just an exit hole in the side."

Later, the snake curled up on a branch in its enclosure. "The Stimmie looking stunning if not a bit stunned after its marathon shedding episode," the center said.

Stimson's pythons use the heat-sensing pits on their lip scales to hunt small mammals, reptiles and amphibians. The serpents are usually found in rocky, shrub and desert areas of Australia, Penning added.

To those curious about the fate of other snakes that get into the same predicament as this one, death is unlikely, as the snakes would probably somehow find a way out rather than remain perpetually stuck in its old skin, Penning said.

"They would just get out of it eventually," he said. "The skin isn't that strong."