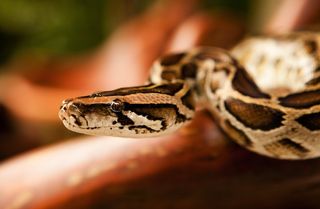 Pythons are nonvenomous snakes found in Asia, Africa and Australia. Because they are not native to North or South America, they are considered Old World snakes. The word python can refer to both the family Pythonidae or the genus Python, found within Pythonidae.

There are 41 species of python found within the family Pythonidae, according to the Reptile Database. Though both pythons and boas are large constrictors, they are separate families.

The family Pythonidae contains some of the largest snakes snakes in the world, according to Sara Viernum, Wisconsin-based founder of The Wandering Herpetologist. “Most pythons are large snakes … such as the reticulated python (Python reticulatus), which can grow over 30 feet [9 meters] in length,” she said. “There are also small species of pythons such as the anthill python (Antaresia perthensis), which only grows up to 24 inches [61 centimeters] in length and is considered the smallest python species in the world.”

The coloration and size of different species of python vary widely. Depending on their local habitats and need for camouflage, coloring can range from elaborately patterned scales (such as those on the Burmese python, the ball python and many other species) to solid brown (leiopythons) to bright green (the green tree python), but scientists note some more subtle physical commonalities.

“Most python species have heat-sensing labial pits to aid them in finding warm-blooded prey,” said Viernum. Pythons that feed on cold-blooded prey do not have the labial pits. Regardless of length, pythons are bulky for their size. They have triangular-shaped heads and sharp, backward-curving teeth that they use to grab prey. Arboreal pythons’ teeth are longer than their terrestrial cousins. Arboreal pythons also have extremely prehensile tails.

“Pythonidae is considered a primitive family of snakes mainly because pythons have remnants of a pelvis and small vestigial hind limbs, called spurs, located on either side of their cloaca,” Viernum continued. “The spurs of males are larger than the spurs of females.” Pythons also have two lungs, a primitive characteristic, since most snakes have evolved to have only one lung.

Within Asia, Africa, Oceania and Australia, pythons stay in relatively warm, wet climates. Many species thrive in rain forests, though pythons also live in grasslands, woodlands, swamps, rocky outcrops, dunes and shrubs, according to the San Diego Zoo. Pythons shelter in hollows, under rocks, in abandoned mammal burrows and tree branches, depending on the species. As humans have developed python habitats, pythons have become accustomed to sheltering in urban debris and farms.

Though native to the Old World, one species of python has made its home in the Western Hemisphere. “The Burmese python is an invasive species that has been discovered living and successfully breeding in the Florida Everglades,” Viernum said. The climate of the Everglades allows it to live much as it would in a Southeast Asian swamp.

Because of their bulk, pythons move by scooting forward in a straight line. This is called “rectilinear progression” movement, according to the San Diego Zoo. Pythons stiffen their ribs for support against the ground then lift their bellies and push themselves forward. It is a slow form of movement and pythons can’t go more than 1 mph (1.6 kph).

Many species of python are excellent swimmers, while others are arboreal, according to Viernum. “They hang from branches with their prehensile tails.”

Pythons have different diets, depending on their size. Small pythons, such as the anthill python, eat mostly rodents, lizards and small birds. Bigger pythons eat mammals as big as monkeys, wallabies, antelope and pigs. According to the San Diego Zoo, a rock python was once found with a small leopard in its stomach. According to an article in Proceedings of the National Academy of Sciences of the United States of America, there have been reports of the large reticulated python attacking humans.

“Pythons are nonvenomous ambush predators,” said Viernum. “Some species are capable of swimming and may lie partially submerged in shallow water waiting for prey to visit the water body.”

It is a myth that arboreal pythons, such as the green tree python, launch themselves from branches onto prey below. This could cause serious injury to the snake. Rather, they lie still on a branch and wriggle their tails to lure in their prey. They strike while still in the tree, according to the World Association of Zoos and Aquariums.

After they’ve grabbed their prey in their long teeth, pythons kill it by constriction. Contrary to popular belief, constriction does not mean crushing. Pythons and other constricting snakes do not use their strength to break their prey’s bones. Many scientists think that pythons suffocate their prey, squeezing the prey’s ribs so that it cannot breathe. In 2015, however, a paper revealed the long-held suffocation theory to be incorrect in boa constrictors, probably the most famous constrictor. The paper revealed that squeezing overwhelms the circulatory system, cutting blood off from the brain and causing death. Scientists are looking into whether other constrictors, including pythons, also use this method.

When the prey is dead, pythons slowly open their jaws and swallow the prey whole, head first. Once the meal is consumed, pythons rest in a warm place while they digest. [Related: Python's Extreme Eating Abilities Explained]

The timing of python mating season depends on the species. When courting, the males use their large spurs (vestigial limbs) to stroke the female, according to Viernum.

“All pythons are egg layers (oviparous),” said Viernum. This sets them apart from boas, the world’s family of other large constricting snakes, which give birth to live young.

“Most species of python provide parental care to their eggs,” Viernum continued. “The females will make nests of vegetation and soil or use old burrows. After the eggs are laid, the female will coil around them to protect the eggs and to keep them warm. If the temperature in the nest begins to decrease the female will contract her muscles to warm eggs. This is known as shivering thermogenesis. Females typically do not feed during this time and may only leave the nest to bask. After the eggs hatch, the female does not care for the hatchling snakes.”

Viernum said that some species of pythons live 25 years or longer. The San Diego Zoo lists 35 years as their maximum lifespan.

The taxonomy of pythons, according to the Integrated Taxonomic Information System (ITIS), is:

ITIS classifies this snake as a subspecies; other sources, such as the Reptile Database, call it a separate species. Burmese pythons are large snakes native to Southeast Asia that have recently made headlines by showing up in Florida. They have pale tan, yellow-brown, or gray bodies with large, reddish blotches outlined in white or yellow, according to the Smithsonian National Zoological Park.

Burmese pythons are regularly caught and killed for their skins or bred as pets. According to the National Park Service, pet owners either accidentally or intentionally released their Burmese pythons into the Florida wilderness. Now, they live and breed successfully in the Florida Everglades, said Viernum, who described them as an invasive species.

Burmese pythons are causing problems in Florida. “This species is a very large, up to 20 feet in length, top predator that is able to consume most of the Everglades’ native wildlife, including medium-sized American alligators,” Viernum explained. “Burmese pythons have very few predators in the Everglades and even the hatchlings are too large for most native predators to consume. Females produce an average of 40 eggs every two years and the hatchlings are 18-36 inches long. This species typically begins breeding at 3-4 years old. Because of their large size and their relatively high reproduction rates, this species is considered to be a major threat to the native wildlife of the Everglades.”

Ball pythons are also known as royal pythons. They are native to west and central Africa but have become popular pets in Western countries. They are large snakes but not gigantic, reaching lengths between 3 and 6 feet (0.9 to 1.8 meters), according to the University of Michigan’s Animal Diversity Web.

Ball pythons have black or dark brown stripes on their face that partially cross their eyes. Their bodies have large dark brown blotches outlined in cream and then outlined in black. According to Seattle’s Woodland Park Zoo, there are several rare color morphs of ball pythons, including snakes with patches of white or lacking yellow, black or red pigments.

Albino ball pythons have a genetic mutation called amelanistism, which limits dark pigments and leaves a white snake with yellow blotches and pink or red eyes. Albino ball pythons are popular among pet owners and the mutation has been cultivated by breeders, according to the pet site World of Ball Pythons.

Thirteen species of python are on the International Union of Conservation of Nature's Red List of Threatened Species. Ramsay’s python (Aspidites ramsayi) is listed as endangered; the Burmese python (Python bivittatus) and the Myanmar short-tailed python (Python kyaiktiyo) are listed as vulnerable. The other species are listed as “least concern.” Humans are a primary threat to pythons, which are regularly killed for their skins.