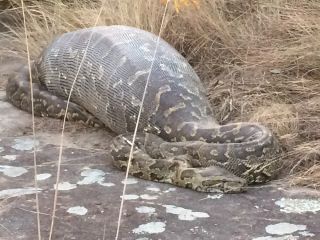 Ever wonder what might happen if a python ate a porcupine? Well, wonder no more. One of these giant snakes — which kill prey by suffocating it and then consuming it whole — recently dined on a porcupine and didn't live to brag about it.

On June 14, a cyclist riding along one of the mountain bike trails at the Lake Eland Game Reserve in KwaZulu-Natal, South Africa, spotted a very engorged snake. The cyclist snapped a few photos of the gluttonous python and posted them to social media, where they quickly attracted the attention of locals who wanted to see the python themselves. Lots of people came to the park in the following days just to view the swollen snake, according to Jennifer Fuller, general manager at the game reserve.

At the time the photos were taken, no one knew what the snake had eaten, just that it must have been something fairly large. On the Lake Eland Game Reserve Facebook page, park staff and visitors speculated as to what the snake may have swallowed for dinner, suggesting everything from a small warthog to a baby impala to an errant child (that last one was posted as a joke). [See Images of the Engorged Python Dining on Porcupine]

But on Saturday, June 20, park rangers found the python dead near the bike trail. They decided to cut it open and have a look inside. What they found was one heck of a snack: a 30-lb. (13.8 kilograms) porcupine.

It isn't unusual for pythons to eat porcupines, Fuller told Live Science in an email. In fact, many species of snakes eat porcupines and other horned or quilled animals, according to a study published in 2003 in the Phyllomedusa Journal of Herpetology. And while a 30-lb. meal might sound like too much to digest, it isn't if you're a python.

As Fuller noted, pythons in the Lake Eland Game Reserve have been spotted consuming even larger prey, including adult oribi antelope, which can weigh nearly 50 lbs. (22.7 kg). Pythons possess the incredible ability to alter their metabolism, as well as the size of their organs, after a meal. This allows the a python to digest prey that is much larger than the snake is, according to a study published in 2013 in the journal Proceedings of the National Academy of Sciences.

It still isn't clear if this python's spiky meal was actually responsible for the predator's death. Rangers found the snake underneath a rocky ledge, where it had apparently fallen. On impact, the quills inside its engorged belly may have pierced the python's digestive tract, which could have killed the animal, Fuller said.

In the 2003 study, entitled "Prickly food: snakes preying upon porcupines," researchers found that when a snake eats a porcupine, the animal's quills are left undigested and are easily detectable in the snake's gut. Sometimes, the quills will even pierce all the way through the snake's body, according to the study. But there's no word yet on whether this particular snake died because it was pierced by quills or because it fell off a ledge (or because it was pierced by quills as a result of falling off the ledge), Fuller told the Australian news website News.com.

Rangers at the reserve stripped off the python's skin after removing the porcupine from the predator's digestive track. They also took measurements of the snake's massive body, which was 12.8 feet (3.9 meters) long. Special attention was paid to the animal's head, which features a highly flexible jaw that allows the animal to open its mouth wide to swallow prey whole.

Despite popular belief, a python's jaw does not actually dislocate when the snake is eating. The two lower jaws move independently of one another, and the quadrate bone at the back of the head attaches the jaw loosely to the skull, allowing the jaw to move around freely.