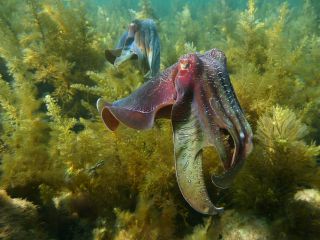 Warming oceans are bad news for a number of marine species, but cephalopods — the many-armed mollusk group that includes octopus, squid and cuttlefish — are doing just fine. In fact, over the past 60 years their numbers have been on the rise, according to a new study.

Scientists gathered data from cephalopod fisheries around the world, examining how catch rates — the number of cephalopods captured or sampled at one time — changed for 35 species between 1953 and 2013.

The researchers found steady increases in diverse cephalopod populations living in a variety of ocean depths and environments, suggesting that changing ocean conditions may actually be beneficial to cephalopods worldwide. [Cuttlefish Cuties: Photos of Color-Changing Cephalopods]

Coincidentally, what originally led scientists to the discovery of booming cephalopod communities was a concern about declining giant Australian cuttlefish (Sepia apama) in South Australia, according to study lead author Zoë Doubleday of Australia's Environment Institute at the University of Adelaide.

Doubleday and her colleagues launched their investigation on a global scale to find out if similar declines were happening elsewhere, she told Live Science in an email.

"Surprisingly, analyses revealed that cephalopods, as a whole, are in fact increasing," Doubleday said. And as it turned out, even the giant Australian cuttlefish's prospects improved over the course of their investigation.

"Since this study, cuttlefish numbers from this iconic population are luckily bouncing back," Doubleday said.

This cephalopod success story isn't entirely surprising, Doubleday explained, since the group is known to be extremely adaptable, referring to them in a statement as "weeds of the sea." They have high metabolic rates and grow continuously and rapidly over the course of their short lifetimes (most live only one to two years). Cephalopods also have flexible life histories, which means that certain key events in their lifetimes — like sexual maturity — can vary, depending on external factors.

Cephalopods' high metabolic rates mean they need to eat frequently. And a rise in hungry cephalopods in the oceans could take a toll on prey populations — including commercially harvested species, Doubleday said. Cephalopods hunt many types of prey, including certain other types of mollusks, fish and crustaceans, such as crabs and lobsters. In a pinch, they'll even eat each other, she added.

And they may not have a choice. Other marine life is not faring so well in warming oceans, with a number of species in peril.

According to a study published Nov. 1, 2013, in the journal Science, over the past 60 years, oceans have warmed 15 times faster than during any other time in the past 10,000 years. Scientists recently noted the devastating impacts of ocean changes on Australia's Great Barrier Reef, currently undergoing the worst bleaching in its history. Other reefs around the world are suffering from the effects of warmer oceans as well, with significant bleaching affecting corals in all three oceans at the same time.

And a study published in Oct. 9, 2014, in the journal Marine Ecology Progress Series, revealed that the biomass of large predatory fish in the world's oceans declined by two-thirds in the past century.

And the pace is accelerating — 54 percent of the decline happened in the last 40 years.

While the scientists behind the cephalopod study don't know exactly what's driving the animals' success, they suggest that these large-scale changes in the ocean environments — a result of global warming and overfishing — are the likely culprits. Unraveling the specific factors and conditions that are helping cephalopods to thrive will be an important part of the larger story — how human activity is affecting the ocean and all of its inhabitants, the scientists said in a statement.

The findings were published online today (May 23) in the journal Current Biology.