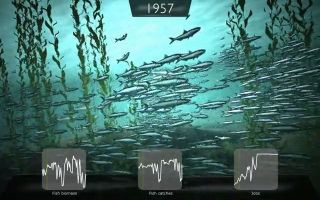 VANCOUVER, British Columbia — Villy Christensen summed it up in a sentence: "Say goodbye to the big fish in the ocean, and say hello to the small fish."

Christensen, a professor at the University of British Columbia and director of the new Nereus program that aims to predict the future of the world's oceans, had good reason to give a warning so dire.

First, the good news. He says that there are still a lot of fish in the sea: There is about 2 billion tons of fish biomass in the ocean, which works out to about 661 pounds (300 kilograms) per person on the planet. Even better, the total biomass in the ocean is staying relatively consistent.

The bad news? The balance in the type of fish has shifted. Big fish in the ocean, like grouper and cod, have experienced a 55 percent decline in last 40 years. In their place are small, oily fish such as myctophids.

The fish that remain are fish humans aren't so interested in catching or eating, Christensen explained here at the annual meeting of the American Association for the Advancement of Science. "Half the world's fish are small, in the open oceans and not exploitable."

The Nereus program is a nine-year project with $13 million in funding to model and understand global changes in the oceans such as this switch in fish. In Greek mythology, Nereus was the eldest son of Pontus (the Sea) and Gaia (the Earth), and was a good and wise god of the sea with the power of prophecy.

The program bases its predictions for the future ocean on a complex data and modeling framework that among other things includes ocean climate models, food web and fisheries models, biogeographic models, and rules for management and governance, all of which it is hoped will vastly expand capacity to answer big global ocean policy questions.

Instead of presenting data in reports or spreadsheets, the scientists teamed up with gamers to build a virtual 3D model of the oceans where future impacts of climate change and conservation decisions can be predicted. The model spans a hundred years, from 1960-2060.

For some fishermen in the northern seas, climate change seemed like a total win: as oceans warmed, fish moved northward, meaning a bigger catch. But this won't continue to be the case, said William Cheung, a researcher at the fisheries center at the University of British Columbia.

Northern waters are able to absorb and hold more gases, particularly carbon dioxide, which is growing steadily in the Earth's atmosphere. Increased carbon dioxide in ocean waters makes it more acidic, and so northern oceans are becoming acidic faster than other parts of the globe; and more acidic seawater means less oxygen available in the water, making it difficult for fish to grow to full size. [8 Most Endangered Places]

Cheung developed a global model that includes more than 600 species of fishes and invertebrates, to investigate the combined impacts of multiple human stressors on marine fisheries potential catch. With warming alone, northern fishermen increase their catch potential by 30 percent. But with the addition of acidification, they end up losing more than they gain.

"Although it's not a crystal ball, these models are a useful tool for developing scenarios," Cheung said.