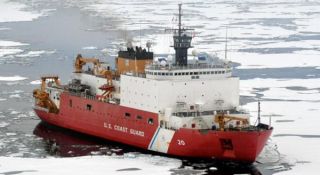 The world's oceans are getting more acidic, and a new mission to the Arctic will help scientists figure out what this means for delicate marine life.

For the second straight year, scientists from the U.S. Geological Survey (USGS) will embark on a research cruise aboard the U.S. Coast Guard vessel Healy to the Arctic Ocean on Aug.15 to collect water samples and other data to determine trends in ocean acidification from the least explored ocean in the world.

What the scientists learn from the data collected during the seven-week cruise will provide an understanding of the extent to which the Arctic Ocean 's chemistry is changing and detail potential implications for carbonate species such as phytoplankton and shellfish that are vulnerable to greater ocean acidity created by climate change.

"Ocean acidification can have broad global impacts on industry, ecosystems, tourism and policy, so it is of vital importance to determine trends and whether impacts are already occurring in oceans around the world," said USGS oceanographer Lisa Robbins.

Ocean acidification is the process by which pH levels of seawater decrease due to the greater amounts of carbon dioxide being absorbed by the oceans from the atmosphere, making the ocean water more acidic. Currently oceans absorb about one-fourth of the greenhouse gas. Lab studies have shown that more acidic waters decrease calcification rates in calcifying organisms, reducing their ability to build shells or skeletons. These changes, in species ranging from corals to shrimp, have the potential to impact species up and down the food chain.

Field experiments are under way in tropical and temperate environments to determine the extent to which calcification rates are already changing, but little is known about the chemistry of the Arctic Ocean and whether changes are already having impacts on the innumerable calcifying organisms that inhabit its waters.

"The Arctic Ocean is one of the most vulnerable areas for ocean acidification on our planet, but there is very little data and understanding about current acidification trends and potential impacts to oceanic food chains in the region," Robbins said. "This research should provide us with greater insight into this growing climatic concern."

During their voyage, the USGS scientists, along with researchers from the University of South Florida, will collect and analyze water samples using an array of highly specialized instruments, including sampling bottles that can collect water from ocean depths up to 11,480 feet (3,500 meters). Instruments will also measure the amounts of oxygen dissolved in the water, its conductivity and temperature.

"Sampling from a variety of environments and depths in the Arctic will provide a robust data set that we can use to compare our techniques as well as give us an overall picture of ocean chemistry changes throughout the water column," said USGS oceanographer Kim Yates.

Last year, the team spent five weeks on board the Healy collecting water samples. This included sampling the Arctic Ocean continuously every two minutes and collecting more than 25,000 data samples. Preliminary data from 2010 is currently being processed and analyzed for trends and will be published later this year. Data from this summer's survey will provide further information about ocean chemistry trends.

The research is taking place during the 2011 U.S.-Canada Extended Continental Shelf Survey research expedition, a joint mission between the U.S. Coast Guard, the USGS and the Canadian Coast Guard.