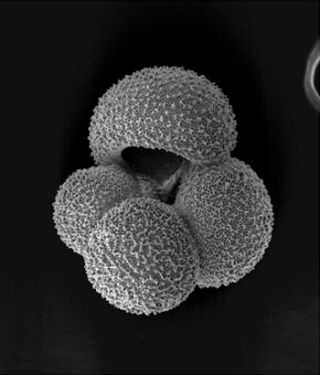 Image showing the shell of the foraminifera from the surface of the Southern Ocean which is noticeably thinner and more porous than the older shell.
(Image: © William Howard)

Scientists have started to see some of the expected effects of Earth's increasing carbon dioxide burden: The shells of microscopic animals in the ocean are becoming thinner thanks to the ocean's absorption of some of that excess carbon dioxide, a new study shows.

The shells of those creatures studied are about one-third lighter.

As carbon dioxide from the burning of fossil fuels has accumulated in the atmosphere, some of it has been absorbed by the ocean. As the gas dissolves in the water, it forms a weak acid (the same kind that's in bubbly soft drinks), causing the ocean itself to become gradually more acidic.

As ocean water becomes more acidic, it also lowers the amount of calcium carbonate available to aquatic animals that use the mineral to build shells or skeletons, such as corals. These organisms can be important links in the marine food chain.

Scientists have predicted that the increase in ocean acidification could significantly reduce the ability of these creatures to build their casings, potentially devastating them and causing rippling effects through the ecosystem. But "until now the potential impact on ocean chemistry and marine life has been based on projections and models" and laboratory experiments, said leader of the new study, Will Howard of the Antarctic Climate & Ecosystems Cooperative Research Centre in Australia.

With funding from the Australian Government Department of Climate Change, Howard and his colleagues collected microscopic marine animals - called planktonic foraminifera, or forams - from the South Tasman Rise region of the Southern Ocean. They compared the weights of the shells of these modern forams to those trapped in ocean sediments before the industrial revolution and the build-up of carbon dioxide.

They found that the modern shell weights were 30 to 35 percent lower than those of the older forams.

The researchers also found a link between higher atmospheric carbon dioxide levels and lowr shell weights in a 50,000-year-long record from a marine sediment core (a long column drilled out from the ocean floor that shows layers of sediments as they were laid down over time).

"Today's results publish the first evidence from nature, rather than a laboratory, that the two are linked," Howard said.

The findings are detailed in the March 8 issue of the journal Nature Geoscience.

If the results are applicable to the rest of the ocean, they could lead to large ecosystem shifts.

"The potential knock-on effects pose significant implications for the oceanic food chain and the findings are a worrying signal of what we can expect to see elsewhere in the future," Howard said. "The Southern Ocean is giving us a strong indication of an acidification process that will spread throughout the global ocean."