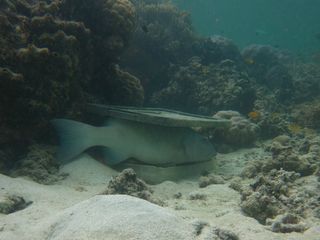 A coral trout squeezes itself into a fish hangout the researchers built.
(Image: © James Kerry.)

Large reef fish have strict ideas about what makes for a good hangout at a coral reef, according to new research.

It turns out that the fish, like some humans, prefer to spend time in intimate settings where the lights are low — a prejudice that may make the top reef predators more vulnerable to climate change.

Researchers at James Cook University in Australia looked at the lounging habits of coral trout, snappers and sweetlips to understand the mechanism behind declines in fish populations when coral reefs are severely damaged.

Doctoral student James Kerry and professor David Bellwood set up underwater video cameras at 17 locations around Lizard Island, an islet on the Great Barrier Reef, to find out what habitats the fish preferred.

"It appears that they much prefer to shelter under overhanging table corals," Kerry said in a statement.

"The importance of this finding is that table corals are among the types most vulnerable to climate change," Bellwood said.

In shallow waters and on the tops of reefs, these types of coral are often the main source of cover for these big fish, Bellwood explained. "If they die back as a result of bleaching or disease, or are destroyed by storm surges, this would strip the reef of one of its main attractions from a coral trout's viewpoint," he said.

By setting up artificial fish hangouts in the lagoon, the researchers also proved that, for big fish, the coral themselves aren't as important as the shelter they provide.

Of the three varieties of fish hideaways the researchers built — with no roof, a translucent roof, and a black roof — the fish far and away preferred the dark-roofed structures, "which suggests they either want to hide or else to avoid direct sunlight," Kerry said.

"The reason for the fishes' preference is not yet clear, but possibilities include hiding from predators such as sharks, shading themselves from ultraviolet sunlight, or lying in ambush for prey," he said.

"This tells us quite a bit about how important these corals are to the overall structure of the reef and the large reef fish that live there."